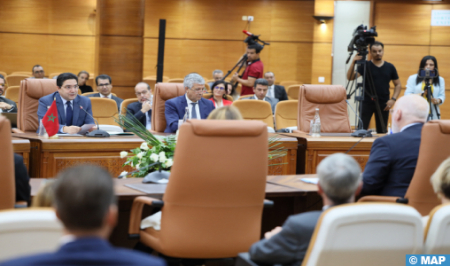 Morocco and the European Union (EU) have all the necessary elements to further enrich their partnership and “immunize it against spoilers” that seek to impede its strengthening, said Nasser Bourita, Minister of Foreign Affairs, African Cooperation and Moroccan Expatriates, on Tuesday. Responding to a question on the appeals filed by the enemies of Morocco’s territorial integrity before the EU Court of Justice, at a press briefing held after the signing of a Memorandum of Understanding on the establishment of a Green Partnership with the EU, Bourita said that Morocco considers this “judicial harassment as an adversity to the partnership” between Rabat and Brussels. He stressed the responsibility of both sides to never allow spoilers to win and so that the virtuous character of this partnership can prevail in the end. “I think we have all the elements to immunize this partnership against these spoilers and to enrich it further.” In this regard, Bourita said that the launch of the Morocco-EU Green Partnership means that Rabat and Brussels are committed to a “partnership of conviction, a partnership of reason and a partnership that serves the interests of both parties. The partnership between Morocco and the EU “is moving in the right direction”, as evidenced by the visit to the Kingdom of six members of the College of Commissioners of the EU and the fact that Morocco has become the first country to conclude a Green Partnership with Brussels, he added. “This is a partnership that is unique in the EU neighborhood. […] A partnership that works, which has allies, which has friends, but which obviously has opponents,” he stressed, noting that “in many areas, it is a reference partnership for the EU’s neighborhood policy.”