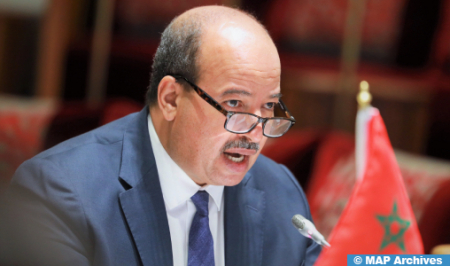 Speaker of the House of Advisors, Enaam Mayara, will be, on Tuesday, the guest of MAP Forum, which will be held under the theme “Opening of parliament: challenges and prospects”. This meeting, which will take place at MAP headquarters in Rabat starting 09:00, will be an opportunity to discuss several issues relating to the opening of parliament and the issues and challenges facing the House of Advisors in a volatile national and international context. It will also be an occasion to discuss ways to consolidate the action of the House of Advisors on the national, continental, regional and international levels in the framework of an effective and efficient parliamentary diplomacy. The Forum will be broadcast live on M24 and RIM-Radio, MAP’s news channel and radio, respectively, as well as via MAP-Live, on the Agency’s website “mapexpress.ma” and its Facebook account. MAP Forum is a platform for debate on current political, economic, cultural and social issues. It brings together representatives of public authorities and personalities from various backgrounds, as well as media representatives.