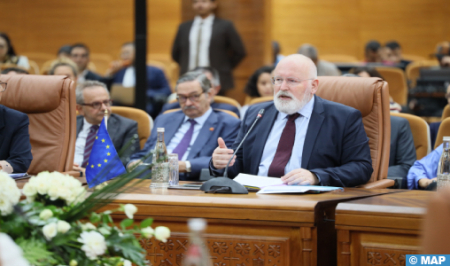 Strengthening relations between Rabat and Brussels has a “limitless potential” in many areas, said Frans Timmermans, Executive Vice-President of the European Commission and Commissioner for Climate Action Policy, on Tuesday in Rabat. Speaking on the occasion of a Memorandum of Understanding on the establishment of a Morocco-EU Green Partnership, Timmermans said that “it is not by chance” that Morocco became the first country to conclude a partnership of this kind with Brussels, given “the very special relationship” that the EU has with the Kingdom and “the leadership role” that Morocco plays in climate adaptation and energy transition. While highlighting the Kingdom’s “literally unlimited” potential in the field of renewable energy, the European official said the EU wants to serve as a partner for Morocco in achieving its sustainability goals thanks to the “vision” and “will” of HM King Mohammed VI. “I see the integration of Morocco in a European economic biosphere. To develop our industrial and economic resilience, we Europeans need our neighbors,” said the senior European official. According to Timmermans, the Green Partnership established with Morocco is able to serve “as an example for many other countries in our neighborhood”, believing that it promotes the creation of new industrial value chains. Morocco and the EU signed Tuesday in Rabat, a Memorandum of Understanding on the establishment of a Green Partnership with the EU, which makes the Kingdom the first country to conclude a partnership of this type with Brussels. Initialled by the Head of Moroccan diplomacy and Timmermans, this memorandum aims to establish a Green Partnership between the partners in the areas of combating climate change, energy transition, environmental protection and the promotion of the green and blue economy. This Green Partnership should, among other things, place the fight against climate change, the promotion and advancement of energy transition, environmental protection and the transition to a green and fair economy among the priorities of relations between the EU and Morocco.