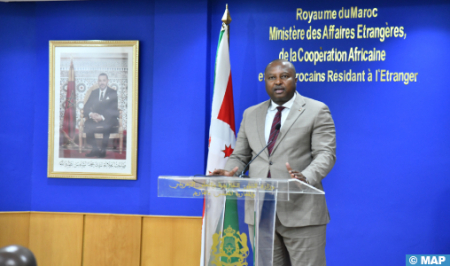 The Republic of Burundi reaffirmed, on Wednesday in Rabat, its commitment to the principle of Morocco’s territorial integrity, while considering the autonomy plan as “the basis for achieving a sustainable, pragmatic and realistic solution” to the dispute over the Moroccan Sahara. This position of Burundi was expressed in the joint statement issued after a meeting between the Minister of Foreign Affairs, African Cooperation and Moroccan Expatriates, Nasser Bourita, and the Minister of Foreign Affairs and Development Cooperation of the Republic of Burundi, Albert Shingiro. Shingiro “reaffirmed the commitment of the Republic of Burundi to the principle of territorial integrity and sovereignty of the Kingdom of Morocco,” the statement says, adding that “the Republic of Burundi considers the autonomy initiative, in accordance with the relevant resolutions of the UN Security Council, as the basis for achieving a sustainable, pragmatic and realistic solution based on compromise.” The Burundian minister also reaffirmed his country’s support for the efforts of the UN Secretary-General and his Personal Envoy to relaunch the political process on the basis of the UN Security Council resolutions, the same source notes, adding that the two parties “are committed to supporting each other on the major issues concerning their fundamental interests.” During a press briefing held after the talks between Bourita and Shingiro, the Burundian minister explained that for his country, “the principles of territorial integrity, sovereignty and national unity are principles that highlight the shared values between us and Morocco but also with other nations.” For his part, Bourita thanked his Burundian counterpart for his country’s “clear and constant positions” regarding the Moroccan Sahara issue.