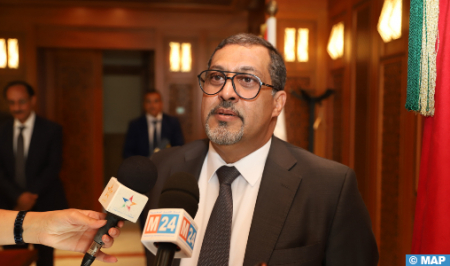 Yemeni Justice Minister Badr Abdo Ahmed Alaredh has expressed his admiration for the Moroccan experience in the field of judicial independence. In a statement to the press after his talks, Monday in Rabat, with president delegate of the Supreme Council of the Judiciary (CSPJ), Mohamed Abdennabaoui, the Yemeni minister said that this meeting aims to review the latest developments in the justice system in Morocco in order to establish mechanisms for exchanging expertise and experience in various areas related to the judicial system, said a statement by the CSPJ. This meeting is part of the promotion of partnership and cooperation between the Council and the judicial authorities of the Republic of Yemen and the examination of prospects for cooperation and exchange of experiences and expertise between the two countries in various areas of common interest, noted the statement. On this occasion, Abdennabaoui gave a detailed presentation on the stages of development of justice in Morocco, the latest of which were the fundamental reforms brought by the Constitution of 2011 and the establishment of an independent judiciary whose independence is guaranteed by His Majesty the King. The Moroccan official emphasized the most important areas of reform of the judicial system, including those related to moralization, modernization, digitization, training and upgrading of human resources, in addition to strengthening judicial efficiency. This meeting between Abdennabaoui and the Yemeni Minister as well as the accompanying delegation, took place the sidelines of the 38th session of the Council of Arab Justice Ministers, held on 19 and 20 October in Ifrane.