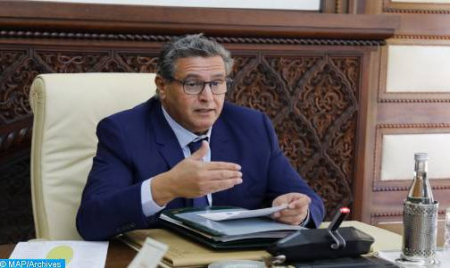 The government is determined to pursue the implementation of its program, in accordance with the High Royal Orientations, the Head of Government Aziz Akhannouch said on Thursday. Speaking at the opening of the Government Council meeting, Akhannouch said that the Executive aims to make development tangible for all Moroccan households, said Minister Delegate for Relations with Parliament, Government Spokesman, Mustapha Baitas at a press briefing after the Council’s meeting. He also noted that the government is fully aware of this specific situation and is making intense efforts in accordance with the Sovereign’s enlightened orientations. The Head of Government also referred to his meeting with the majority’s components, noting that this meeting was marked by the examination of the challenges encountered during this year. Akhannouch also said that the government was able to meet these challenges thanks to its sustained action, the confidence of its allies and the positive coordination between the components of the majority to meet with responsibility the expectations of citizens. He also mentioned his meeting with the opposition parties in parliament, convinced of their role in consolidating the democratic edifice, noting that this meeting was an opportunity to inform these political parties of the government’s achievements during this year and to exchange views on the new features of the 2023 Finance Bill. The meeting also allowed to take note of the proposals of these parties and their visions to meet the socio-economic challenges facing the country, he added. The Head of Government has, on the other hand, stressed the need to maintain the pace of government action and raise it to higher levels to meet the aspirations of HM the King and citizens. He announced, in this sense, the publication of a book on the assessment of government action in 2022, noting that this is an initiative to establish a governmental tradition reflecting the spirit of the constitutional principle linking responsibility to accountability, and to enshrine the values of transparency, participation and communication with public opinion to interact with its concerns. This publication will be available for consultation and download on the website “www.cg.gov.ma” from Friday at noon, said Akhannouch, noting that the government majority has adopted its content. It presents a global vision on government’s actions in the different public policies to face the successive crises and honor the commitments of the Executive, in consecration of the foundations of the social state, he said.