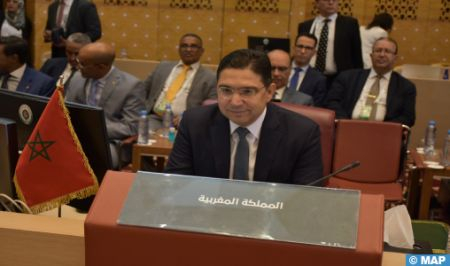 The reports according to which the Minister of Foreign Affairs, African Cooperation and Moroccan Expatriates Nasser Bourita left the venue of the preparatory meeting of foreign ministers of the Arab Summit following a dispute with the head of Algerian diplomacy are completely unfounded, contrary to the allegations made by some Algerian websites and media, a high-level diplomatic source said. The Moroccan delegation remained in the room and protested against the failure of an Algerian channel to respect the map of the Kingdom, as recognized, which forced the Arab League to issue a clarification and the chairmanship of the session to apologize, the same source added. According to the same source, it is neither in the habits nor in the customs of the Moroccan diplomacy’s action, in accordance with the High Instructions of HM King Mohammed VI, to leave the meeting room, but to defend within these meetings Morocco’s legitimate rights and its vital interests. All reports according to which the Moroccan delegation would have left the meeting room are unfounded, concluded the source.