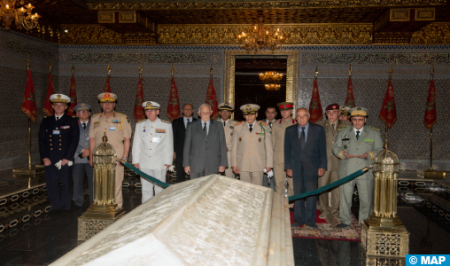 A delegation of Chiefs of Staff of the Armed Forces of the member countries of the 5+5 Defense Initiative on Thursday made a visit to the Mohammed V Mausoleum in Rabat, where it paid tribute to the graves of His Majesty Mohammed V and His Majesty Hassan II. The visit of this delegation comes on the occasion of its participation in the 14th meeting of the Chiefs of Staff of the Armed Forces of eight member countries of the Initiative, namely France, Italy, Libya, Malta, Mauritania, Morocco, Portugal and Spain. During this visit, which took place in the presence of Abdelhak Lamrini, historiographer of the Kingdom and curator of the Mohammed V Mausoleum, the members of the delegation signed the Golden Book of the Mausoleum. Created in 2004, the 5+5 Defense Initiative is a forum for consultation and multilateral understanding between the two shores of the Western Mediterranean. Bringing together five states from the southern shore of the Mediterranean (Algeria, Libya, Mauritania, Morocco and Tunisia) and five states from the northern shore (France, Italy, Malta, Portugal and Spain), this forum provides a preferential framework for mutual knowledge and exchanges on common security issues in the 5+5 area. Its presidency rotates.