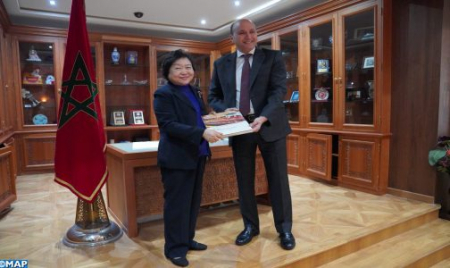 Deputy speaker of the House of Representatives, Hassan Benomar, met, Monday in Rabat, with chairwoman of the Moroccan-Korean parliamentary friendship group, In Jae Keun, who is on a three-day visit to the Kingdom leading a South Korean delegation. In a statement, the House of Representatives said that these discussions, attended by the Ambassador of the Republic of Korea to Morocco, Keeyong Chung, focused on ways to strengthen bilateral cooperation, as well as on issues of common interest. On this occasion, Benomar presented, on behalf of the upper house, his condolences to the South Korean parliamentary delegation following the stampede that took place last Sunday in Seoul. The two parties observed a minute of silence in tribute to the victims, said the same source. The deputy speaker of the House of Representatives also welcomed the distinguished relations between the two countries, highlighting the achievements of the Kingdom in various areas in recent years, including renewable energy, management of the COVID-19 pandemic and water stress. He also expressed the willingness of Morocco to consolidate cooperation between the two countries in the field of technical training, given the leadership of South Korea in this area. Benomar also called for strengthening parliamentary cooperation through the exchange of experiences and expertise between the two legislative institutions, emphasizing, in this sense, the role of Moroccan women in political life. For her part, Jae Keun said that this visit is part of the celebration of the 61st anniversary of the establishment of diplomatic relations between Morocco and South Korea, noting that they are in constant development.