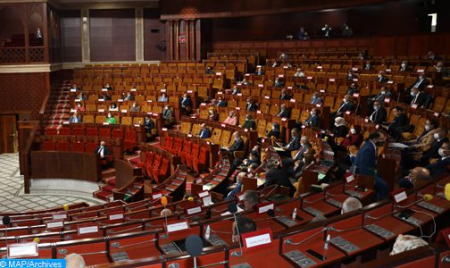 The House of Representatives adopted on Monday unanimously three bills, namely bill No. 86-21 on firearms, their parts, components, elements, accessories and ammunition, bill No. 96-21 amending and supplementing law No. 17-95 on joint ventures and bill No. 102-21 on industrial zones. In his presentation of the first bill on firearms, minister of the Interior, Abdelouafi Laftit said that this text seeks to modernize and improve the legal framework governing firearms so as to be in line with changes in legal and technological terms and also meet the security challenges posed, especially with the boom in the industry in the field of armaments or the import of weapons, their export as well as their possession legally or illegally. The Minister noted, in this regard, that the current legal framework is no longer appropriate to the situation today, not providing for coercive penalties, and thus becoming obsolete in the vast majority of its provisions, especially after the ratification by Morocco, on April 17, 2009, of the Protocol against the Illicit Manufacturing of and Trafficking in Firearms, Their Parts and Components and Ammunition, supplementing the United Nations Convention against Transnational Organized Crime, signed in New York on 30 May 2001. For his part, Minister of Transport and Logistics, Mohamed Abdejelil, said in his presentation of bill No. 96-21 which amends and supplements law No. 17-95 on joint ventures, that this text is part of the accession of Morocco on October 18, 2011 to the Global Forum on Transparency and Exchange of Information for Tax Purposes, thus committing itself as a member of this Forum to comply with international standards, especially on the register of exchange of information and identification of the holder of shares in all cases. Regarding bill No. 102-21 on industrial zones, Abdejelil stressed that it is part of the materialization of the industrial policy conducted by Morocco under the enlightened leadership of His Majesty King Mohammed VI, stating that the industrial infrastructure in Morocco is undergoing sustained development so as to better accompany industrial investment and support socio-economic development.