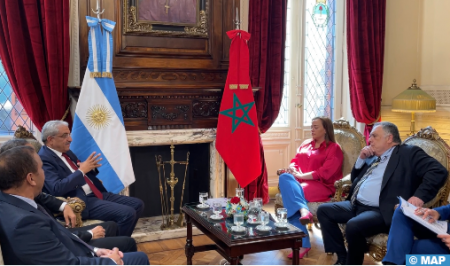 Ways to strengthen parliamentary cooperation between Morocco and Argentina were the focus of a meeting, Thursday at the headquarters of the Argentine Congress in Buenos Aires, between first deputy speaker of the House of Representatives, Mohamed Sabbari and president of the Chamber of Deputies of Argentina, Cecilia Moreau. During this meeting, which took place in the presence of the Moroccan ambassador to Argentina, Fares Yassir, both parties underlined the excellent diplomatic relations between the two countries, which have been strengthened through the exchange of visits between different officials, as well as the active participation in multilateral organizations, in addition to the scientific and technical, space, educational and cultural cooperation. The two sides also reviewed the main issues of the bilateral agenda, which is characterized by close coordination in areas such as trade, tourism, agriculture, industry, environmental protection and the use of nuclear energy for peaceful purposes. Referring to the commercial opportunities between the two countries, the president of the Chamber of Deputies of Argentina stressed the great potential that both countries have to expand the horizons of trade and technical cooperation, especially in areas related to agribusiness, Argentina being a world leader in cattle genetics, seeding and grain storage. The two parties also discussed the need to strengthen institutional relations between the parliaments of the two countries, including through parliamentary diplomacy as a tool to promote the bilateral agenda. At the end of the meeting, Eduardo Felix Valdes, chairman of the Committee of Foreign Relations of the Chamber of Deputies of Argentina, said in a statement to the Moroccan news channel M24, that the exchanges with the Moroccan delegation were fruitful, stressing “the great proximity” between his country and Morocco, a proximity that facilitates the strengthening of relations between the two legislative institutions. Eduardo Valdes added that this meeting with the Moroccan delegation was an opportunity to discuss issues of common interest, such as the repercussions of the war in Ukraine, pleading for a strong impetus of trade between Morocco and Argentina, which amount to about one billion dollars, but whose value can be doubled, especially in the areas of fertilizers and agriculture, especially cereals. For his part, Sabbari stressed the need to activate the Morocco-Argentina parliamentary friendship group and promote the exchange of experiences in the field of legislation and parliamentary action, including investment and tourism. The Moroccan delegation is on a visit to Argentina to take part in the 12th Consultative Assembly of Parliamentarians on the International Criminal Court and the Rule of Law (CAP-CPI), held in the Argentine capital on November 4 and 5.