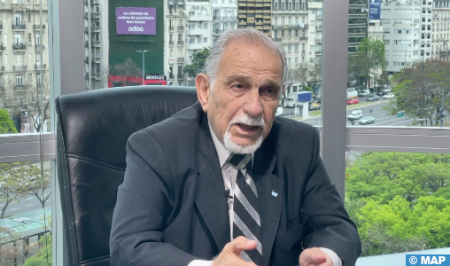 During his historic visit to Argentina in 2004, HM King Mohammed VI had “sown the seeds of a close cooperation between Morocco and Argentina,” said Secretary General of the Circle of Argentine legislators, Nestor Perl. This former MP stressed, in a statement to the Moroccan news channel M24, that “the Kingdom is our gateway to Africa and our ties with the black continent pass through Morocco,” highlighting the many facilities offered by the Kingdom for Argentina to explore trade opportunities with Africa. Perl, who was governor of the province of Chubut (south), stressed the importance of seeing bilateral relations evolve towards new horizons of prosperity, against the backdrop of a great rapprochement on the political level between Morocco and Argentina. Also a professor of international law at the University of Buenos Aires, Perl added that Morocco is globally recognized as a land of coexistence and openness, an advantage it shares with Argentina, stressing that the values of coexistence are essential to meet the fundamental challenges of today’s world, including extremism and sectarianism. According to Pearl, who was previously his country’s ambassador to Italy, strengthening the rapprochement between the two peoples “allows us to create a space for cultural exchange and cooperation, which will eventually be reflected in the quality of life of citizens of both countries”. For him, the strategic geographical location of Morocco, at the confluence of the Atlantic and the Mediterranean, makes it the cradle of several civilizations and cultures and the promoter of the values of tolerance and coexistence.