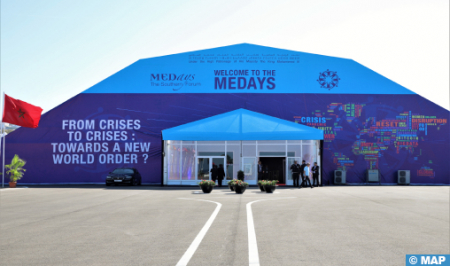 Hungary’s Minister of Foreign Affairs and Trade, Péter Szijjártó, reaffirmed, Friday in Tangier, his country’s support to the Moroccan autonomy plan and to the UN process to resolve the Sahara issue. “I would like to reaffirm the joint statement of last year (…) indicating Hungary’s support to the autonomy concept presented by Morocco,” said Szijjártó in a statement to the press on the sidelines of his participation in the 14th edition of the MEDays Forum, (November 2-5). “We will use all opportunities within the framework of the UN to promote a peaceful solution to the Sahara issue, to advance as soon as possible peace, stability and tranquility in this region,” he stressed, while welcoming the cooperation between the Kingdom and Hungary as well as his personal cooperation with Minister of Foreign Affairs, African Cooperation and Moroccan Expatriates, Nasser Bourita. Referring to his participation in the MEDays, the Hungarian minister said he was “particularly honored” to take part in this event, saying that “this is a wonderful opportunity to talk about current circumstances and challenges we face”. “I come from a country that is a direct neighbor of Ukraine. So you can imagine that the impacts of the war on Hungary are serious and immediate,” he said. Szijjártó took the opportunity to plead for the cessation of the conflict in Europe, urging the international community to “refrain from any kind of decision or statement that would run the risk of a new escalation of the war”.