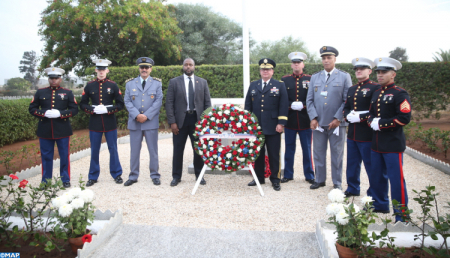 On the occasion of the 80th anniversary of Operation Torch, the U.S. diplomatic mission in Morocco proceeded, Tuesday, to the laying of wreaths at the marker of the Western Naval Task Force at the Ben M’sik military cemetery. This ceremony was attended by the Consul General of the United States in Casablanca, Lawrence Randolph and Jon Solem, Brigadier General of the U.S. Africa Command (AFRICOM), in addition to Moroccan and American civilian and military personalities. It was marked by a parade of a detachment of Marines in front of the commemorative stele of this event where the American flag was raised to the rhythm of the U.S. national anthem. In a statement to the press, Lawrence Randolph said that exactly 80 years ago more than 30,000 U.S. soldiers landed in Morocco as part of Operation Torch and it was the first major U.S. military operation in the European and North African scene during the Second World War and an important step in the deep and historical ties between the United States and Morocco. The American diplomat also emphasized the vital security partnership between the United States and Morocco that exists today, recalling that Morocco hosted a U.S. naval air station in Kenitra during the the Cold War. In this regard, Lawrence Randolph recalled that over the past two decades, Morocco has hosted African Lion, the largest military exercise in Africa, which is a symbol of the Kingdom’s role in supporting regional stability, noting that today, the commitment of the United States and Morocco to support regional peace and security is stronger than ever. For his part, Jon Solem said that the work with U.S. African partners, including Morocco, demonstrates the critical role of the continent in ensuring global peace and security – yesterday, today and tomorrow. Regarding Operation Torch, he said that it is one of the largest military landings in history, and it was also a turning point in the Second World War. To date, Morocco coordinates closely with the United States on many important security issues. It participates in more than 100 military exercises and events annually, hosts the largest annual military exercise on the African continent – African Lion – and remains a major partner in U.S. military education and training programs.