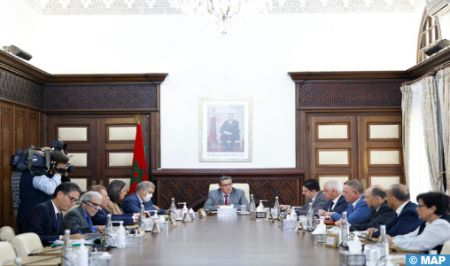 The Head of Government Aziz Akhannouch chaired, on Tuesday in Rabat, a meeting devoted to examine preparations for the holding of the Annual Meetings of the World Bank Group (WB) and the International Monetary Fund (IMF), scheduled to take place in Marrakech in October 2023. These assemblies should gather 14,000 participants from 189 member countries of these two international institutions the Department of the Head of Government said in a statement, adding that this preparatory meeting will be followed by a series of meetings to ensure the success of this international event organized for the first time in 50 years on the African continent. This meeting allowed to review the steps taken in the preparations for the holding of this event in Morocco, as well as its communication plan, notes the same source. The annual meetings of the WB and IMF are usually held for two consecutive years at the headquarters of the the World Bank Group and the IMF in Washington DC and the third year in one of the member countries, the statement said. At these annual meetings, central bank governors, finance and development ministers, private sector leaders, civil society and media representatives and academics gather to discuss issues of global concern, including the outlook for the world economy and financial stability, poverty eradication, economic growth, job creation, climate change, and other topical issues. This meeting took place in the presence of the Minister of Interior, Abdelouafi Laftit, the Minister of Foreign Affairs, African Cooperation and Moroccan Expatriates, Nasser Bourita, the Minister of Economy and Finance, Nadia Fettah, the Minister of Health and Social Protection, Khaled Ait Taleb, the Minister of Transport and Logistics, Mohammed Abdeljalil, the Minister Delegate to the Head of Government in charge of Investment, Convergence and Evaluation of Public Policies, Mohcine Jazouli and the Minister Delegate to the Minister of Economy and Finance, in charge of Budget, Fouzi Lekjaa. The meeting was also attended by the Governor of Bank Al-Maghrib, Abdellatif Jouahri, the Secretary General of the Ministry of Economy and Finance, Nabil Lakhdar, the Director of Treasury and External Finance at the Ministry of Economy and Finance, Fouzia Zaaboul and the Director of Administrative and General Affairs at the Ministry of Economy and Finance, Mohamed Al Kharmoudi. The Head of Government met last week with representatives of the World Bank and the IMF, at the end of their annual consultative visit that began on October 24. During this meeting, the representatives of the two institutions were informed of the preparations underway to host the Annual Meetings in the Kingdom.