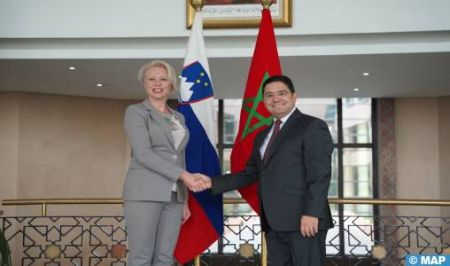 President of the National Assembly of the Republic of Slovenia, Urška Klakočar Zupančič, highlighted, Tuesday in Rabat, the constructive role that Morocco plays at the continental level. In a statement to the press after her talks with Minister of Foreign Affairs, African Cooperation and Moroccan Expatriates, Nasser Bourita, president of the Slovenian National Assembly welcomed the action of Morocco “to build a better world not only in its region, but also in a broader context”. She also highlighted the dynamics of development that Morocco witnesses, emphasizing the willingness of her country to strengthen its cooperation with the Kingdom. “We appreciate and recognize the development that Morocco has achieved through its energy strategies and policies, including solar systems, and we really aspire to cooperate with Morocco to share our knowledge,” she noted, adding that her talks with Bourita focused on strengthening cooperation relations between Slovenia and Morocco. She stressed that the parliaments of both countries will initiate discussions and intensify exchanges and visits, in order to contribute to the strengthening of cooperation between the two countries in the economic, social and tourism fields. The Slovenian official lauded in this regard the assets of the Kingdom as a destination highly valued by Slovenian tourists. Klakočar Zupančič, who held talks with speaker of the House of Representatives, Rachid Talbi Alami and speaker of the House of Advisors, Enaam Mayara, stressed that her visit is intended to be the prelude to a “great friendship between Morocco and Slovenia.”