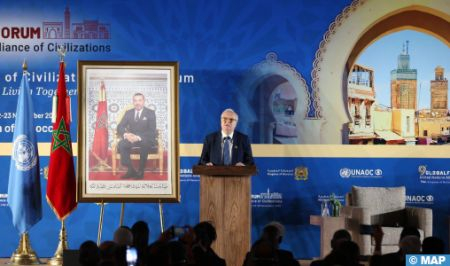 The Alliance of Civilizations should be an initiative that studies and discovers the similarities and synergies that exist philosophically, religiously and practically between different cultures and religions, while helping to distinguish and identify their differences, the High Representative of the United Nations Alliance for Civilizations (UNAOC), Miguel Ángel Moratinos, said on Tuesday in Fez, Speaking at the opening of the 9th Global Forum of the UNAOC in Fez, (November 22-23), Moratinos explained that these differences must be resolved in an open dialogue and in a peaceful manner in order to find solutions and avoid that they are manipulated and used as a source of controversy. Therefore, the Alliance of Civilizations can precisely serve as a platform to facilitate the understanding and respect of each of our cultures and civilizations, which need each other anyway to survive in the future, he added. In this regard, he argued, the meeting in Fez is an opportunity to defend more than ever the need for an alliance of peace between different civilizations, commending the “full support of HM King Mohammed VI and His leadership in organizing this Forum.” “We, citizens of the world, should be able to express ourselves with a sufficient level of maturity and development and make a leap towards building a terminology and a positive political action. In the face of negative concepts and attitudes, we must defend a new positive vocabulary,” stressed the UN official. The world, he noted, is not witnessing a clash of civilizations, but a clash of interests and ignorance, as well as clashes and struggles for hegemony and to obtain areas of influence, which it is necessary to combat through a dialogue and a meeting of civilizations. The opening session of this two-day forum, held under the theme: “Towards An Alliance of Peace: Living Together as One Humanity”, was marked by a message addressed by HM King Mohammed VI to the participants, which was read by Mr. André Azoulay, Advisor to HM the King. Co-chaired by the Minister of Foreign Affairs, African Cooperation and Moroccan Expatriates, Nasser Bourita, and the High Representative for the United Nations Alliance of Civilizations, Miguel Angel Moratinos, this event is attended by many prominent figures including the UN Secretary-General, Antonio Guterres. A thousand participants of official delegations belonging to the group of countries and organizations friends of the alliance, civil society, actors in the field of action of the alliance, academics, young professionals and students take part in this forum. This international event aims to promote dialogue and cooperation between different communities, cultures and civilizations, and to build bridges that unite populations and people beyond their cultural or religious differences, developing a series of concrete actions aimed at conflict prevention and peace building.