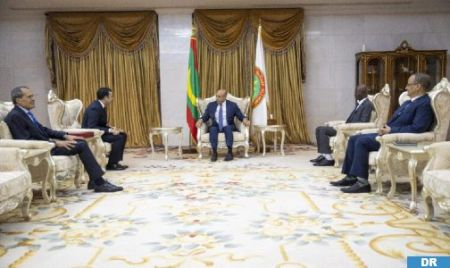 Mauritanian President Mohamed Ould Cheikh El Ghazaouani received in audience, Tuesday in Nouakchott, the Minister of Economic Inclusion, Small Business, Employment and Skills, Younes Skouri, bearing a written message from HM King Mohammed VI. In a statement to the press after this audience attended by Morocco’s Ambassador in Mauritania, Hamid Chabar, Skouri said he was honored, as a special envoy of the Sovereign, to meet with President Mohamed Ould Cheikh El Ghazouani to whom he handed a written message from His Majesty King Mohammed VI. He added that this meeting was an opportunity to review the distinguished relations between His Majesty the King and his brother President Mohamed Ould Cheikh El Ghazouani, and between the Kingdom of Morocco and the Islamic Republic of Mauritania. He stressed that this relationship is not only limited to cooperation on economic and social levels, but also constitutes the enshrinement of a common history and the extension of a special love that unites the Mauritanian and Moroccan peoples. He also emphasized the distinguished relations which are characterized by solid foundations based on mutual respect and a strong and real strategic partnership and cooperation in important and promising sectors of interest to both peoples and countries.