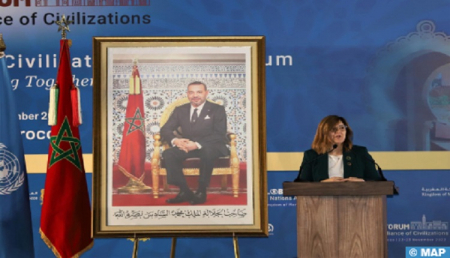 The Spanish Secretary of State for International Cooperation Pilar Cancela Rodriguez, stressed on Tuesday in Fez the importance of holding the forum of the United Nations Alliance of Civilizations (UNAOC) on African soil for the first time. Speaking at the opening of the 9th Global Forum of the UN Alliance of Civilizations, the Spanish official also highlighted the priority given by the alliance to the African continent, emphasizing the need to take into account the role of the continent and the situation of the precarious countries to meet future challenges. Rodriguez also noted that the city of Fez reflects the values of coexistence and the relevance of the theme chosen for the 9th forum of the UNAOC, namely: “Towards an alliance of peace: Living together as one humanity”, expressing her deep thanks to HM King Mohammed VI. The UNAOC, sponsored by Spain and Turkey, works to promote respect and dialogue, she said, calling for the development of proactive diplomacy to fight extremism and serve peace. The Spanish official also noted that her country promotes the values of dialogue of civilizations and cultures, recalling that the Alliance of Civilizations is interested, among other things, in promoting the role of women and youth, migration, cultural identity and common values. The opening session of this two-day forum, held under the theme: “Towards An Alliance of Peace: Living Together as One Humanity”, was marked by a message addressed by HM King Mohammed VI to the participants, which was read by Mr. André Azoulay, Advisor to HM the King. Co-chaired by the Minister of Foreign Affairs, African Cooperation and Moroccan Expatriates, Nasser Bourita, and the High Representative for the United Nations Alliance of Civilizations, Miguel Angel Moratinos, this event is attended by many prominent figures including the UN Secretary-General, Antonio Guterres.