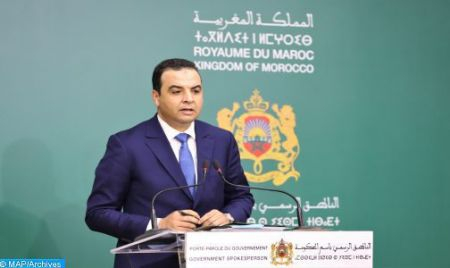 The Government Council, meeting on Thursday by videoconference, adopted the bill no. 53.22 approving the draft decree-law no. 2.22.770 of October 6, 2022, enacting special provisions relating to the National Press Council. Presented by the Minister of Youth, Culture and Communication, Mohamed Mehdi Bensaid, this project comes under the provisions of Article 81 of the Constitution which states in its first paragraph that “the government may take, in the interval of the sessions, with the agreement of the relevant committees of the two Houses, decrees-laws that must be, during the next ordinary session of Parliament, submitted for ratification of the latter,” said the Minister Delegate for Relations with Parliament, Government Spokesman, Mustapha Baitas, at a press briefing held after the Council. He also noted that the government has published on October 6, 2022, after the endorsement of the Committee on Education, Culture and Communication in the House of Representatives and the Committee on Education and Cultural and Social Affairs in the House of Councillors, the decree-law no. 2.22.770 enacting special provisions relating to the National Press Council. This project aims at completing the procedure set forth in the Constitution, particularly in article 81, in order to submit the above-mentioned decree-law to the Parliament for approval, during its next ordinary session.