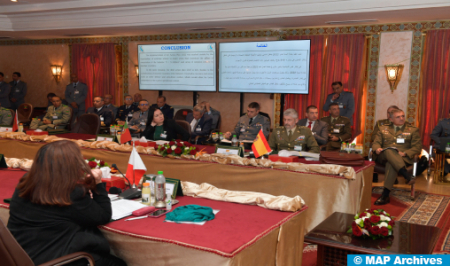 The 35th meeting of the Steering Committee of the 5+5 Defense Initiative wrapped up on Thursday in Rabat, after two days of exchange and consultation. In a speech delivered on this occasion on behalf of Lieutenant General, Inspector General of the Royal Armed Forces and Commander of the South Zone, Belkhir El Farouk, Brigadier General Mohamed Haial said that “the rich debates and relevant discussions held around the topics that were the subject of the program of this meeting reflect, without doubt, the willingness of representatives of member countries to maintain the dynamism of the Initiative and their determination to ensure its continued development and sustainability.” “The work of this session reflects the efficiency of the cooperation mechanisms of the Initiative and reassures us of its sustainability and its continued development,” he said, commending the “constructive” contributions that have helped promote dialogue on issues of common interest in a spirit of respect, mutual trust and shared responsibility. He also took this opportunity to “reaffirm the commitment of the Royal Armed Forces to continue their contribution to the development of the 5 + 5 Defense Initiative and to spare no effort in carrying out activities under the action plans jointly agreed.” Welcoming the efforts of all member countries for their contribution to the successful implementation of activities carried out under the 2022 Action Plan, the development of the 2023 Action Plan and the finalization of the draft Ministerial Declaration, he also wished “full success to our Portuguese friends who will assume the presidency of the 5 + 5 Defense Initiative for the year 2023.” For his part, Brigadier General Ismail Makhlouf Milad, head of the Libyan delegation, stressed the importance of this meeting, congratulating the Kingdom of Morocco for its successful presidency of the 5+5 Defense Initiative for 2022. The Libyan military official also praised the careful organization by Morocco of all meetings during its presidency of the Initiative, wishing full success to Portugal during its next presidency in 2023. For her part, the head of the Portuguese delegation, Elisabete Gomes, took the opportunity to express her deep thanks to the Kingdom for its “dynamism during the year 2022”, ensuring that Portugal is ready to assume its presidency in 2023. Gomes added that her country will organize, within the framework of its presidency, the activities that fall under the 5+5 Defense Initiative, as well as exercises related to cyber defense, special operations forces and the agenda of women, peace and security. Spread over two days, this meeting was marked by the finalization of the 2023 Action Plan, with the key 60 activities covering virtually all areas of cooperation, as well as the finalization of the draft Joint Declaration to close the work of the 18th meeting of Ministers of Defense scheduled for December 16 in Rabat.