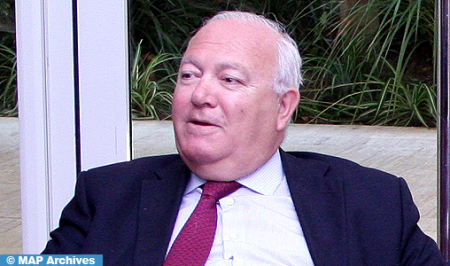 Former Spain’s top diplomat and High Representative of the United Nations Alliance of Civilizations Miguel Angel Moratinos called, Friday in Rabat, for a political will to serve the Mediterranean, which he called “forgotten sea”. Speaking at the opening ceremony of the annual meeting of the Group of Studies and Research on the Mediterranean (GERM), organized this year around the theme “The Mediterranean in the new geopolitical challenges,” Moratinos deplored “the lack of interest, dynamism and commitment,” especially at the European level, for a prosperous Mediterranean area. “It is we Mediterraneans who are capable of saving the Mediterranean,” he said, adding this can be achieved through a “personal, collective and active mobilization.” Moratinos also took the opportunity to welcome the creation of the Euromed University of Fez, which he said reflects a willingness and interest in the Mediterranean that gives hope for a better future. For his part, GERM chairman, Habib El Malki, said that “the divisions are hardening to such an extent that diplomacy is in crisis,” calling to re-legitimize the political, to launch a new pact between North and South and face the decline of multilateralism during the last twenty years. Deploring the lack of solidarity and dialogue on several relevant issues at the Mediterranean level, El Malki stressed the need to find new mechanisms for dialogue between East and West, and North and South. He said that these new mechanisms must be “broadly relevant and useful so that humanity can continue to be what it is.” Referring to climate change, migration and wars that ravage several countries on the southern shore of the Mediterranean, El Malki said that this kind of meeting can remind intellectuals their obligations. This opening ceremony was marked by the signing of a partnership agreement between GERM and the Institute of Research and Studies Mediterranean Middle East (iReMMO), initialed by El Malki and the iReMMO chairman, Jean Paul Chagnollaud. Organized by GERM in partnership with the Hanns Seidel Foundation, this meeting, which knows the participation of eminent academic, diplomatic and political figures, is held around three major axes, namely, “Forces and geopolitical issues in the Mediterranean”, “Crisis and political instabilities in some countries around the Mediterranean” and “South-South partnership and renewed territorial policies”.