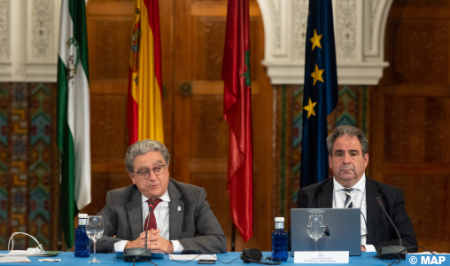 Relations between Andalusia and Morocco are a “reference” in terms of cooperation and good neighborliness, stressed Secretary General of External Action, European Union and Cooperation of the Regional Government of Andalusia, Enrique Millo. “We are called upon to promote public and private cooperation to increase investment and create clear and concrete projects,” said Millo at a meeting held recently at the Foundation Three Cultures of the Mediterranean, under the theme “Andalusia, Euro-Mediterranean node Spain-Morocco”. Noting that “Andalusia is the gateway of Spain to Europe and also the gateway of Europe to Africa,” Millo stressed the importance of communication to foster knowledge and promote understanding within the framework of respect, trust and loyalty, as well as “the great responsibility of the media and politicians”. According to Minister of the Presidency, Interior, Social Dialogue and Administrative Simplification in the Andalusian regional government, Antonio Sanz, Andalusia has reached a record figure in exports to Morocco in the first nine months of this year, with 1,530.4 million euros, almost the same amount as in the whole year 2021, which reached 1,641.2 million. In 2021, Andalusia was the 3rd Spanish autonomous community in exports to Morocco, accounting for 17% of Spanish exports to the Kingdom, said Sanz, noting that Morocco is among the top ten trade customers of Andalusia, along with the United States and China.