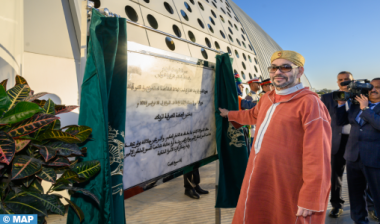 His Majesty King Mohammed VI, may God assist him, proceeded on Monday to the inauguration of the new bus station of Rabat, a project that structures the southern entrance of the city, modernizes the interurban transport sector at the level of the conurbation and participates in the consolidation of the image of the Capital of the Kingdom and the strengthening of its attractiveness. The new bus station of Rabat, which is in line with the objectives of the integrated development program of the city of Rabat, called “Rabat City of Light, Moroccan Capital of Culture”, has 46 bus platforms and a 22-place long-term parking lot for buses, against 38 platforms in the old bus station of Al Kamra. The new bus station, which includes an outdoor parking lot for cars and cabs, a drop-off area, as well as catering and commercial premises, has the capacity to accommodate more than 10,000 passengers per day, compared to 6,000 passengers in the old station. It houses a shopping center with 40 shops, while the Al Kamra station had only 15 commercial premises. Mobilizing investments in the order of MAD 245 million, this project illustrates the Sovereign’s firm commitment to provide the city of Rabat with infrastructure commensurate with its status and in line with the expectations of the population, residents and visitors. Designed according to a unique architecture, combining modernity and authenticity, the new bus station, which benefits from a direct access from the Rabat-Casablanca freeway, was built on a plot of land of more than 8 hectares, located at the southern entrance of the Rabat-Casablanca freeway, close to the Prince Moulay Abdallah Sports Complex of Rabat. The bus station, whose construction work was launched by the Sovereign in October 2017, meets the most modern architectural standards that allow the optimization of interior spaces, for a smooth management of passengers, the strengthening of the attractiveness of the external environment, and compliance with the requirements of safety, security and quality of services. The new-generation bus station is equipped with an integrated management information system that facilitates the reception and information of passengers, ensures optimal management of passenger transport and logistics operations and facilitates the purchase of travel tickets. In addition to the obvious advantage of saving time, this system helps to know the departure and arrival times of buses and their routes, to avoid intermediaries, and to fight against any illegal increase in ticket prices, the objective being to promote the road passenger transport sector which allows to connect different cities in the Kingdom and generates many jobs. The new station also has infrastructure and equipment that allow passengers and visitors to the station to enjoy the best services, in full compliance with safety conditions. The same is true for professionals in the road transport sector who, thanks to this new structure, have adequate working conditions to improve their competitiveness, increase their turnover and preserve their dignity. In addition, the strategic position of the new bus station and its connection to the network of national roads and highways will contribute to traffic decongestion within the city of Rabat, reducing the rate of pollution and optimizing passenger transport, thanks to a connection of the new station to the urban transport network. With high added value, the new station of Rabat comes in addition to the many actions and initiatives undertaken by His Majesty the King, may God assist Him, and intended to improve the living conditions of citizens and ensure an integrated, balanced and inclusive development of the various cities of the Kingdom. On the sidelines of this inauguration and on the same site, His Majesty the King, may God assist Him, was greeted by the Director General of the United Nations Educational, Scientific and Cultural Organization (UNESCO), Mrs. Audrey Azoulay. The Sovereign had, on this occasion, talks with Mrs. Azoulay on the preservation and protection of intangible heritage.