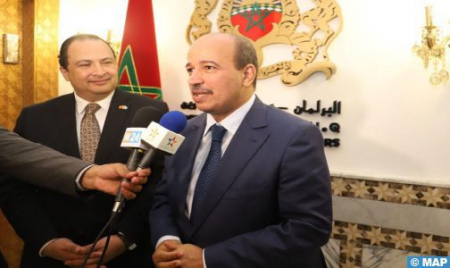 The Speaker of the House of Advisors, Enaam Mayara, on Tuesday held talks with the Guatemalan Minister of Foreign Affairs, Mario Adolfo Búcaro, currently on a working visit to Morocco. A statement from the upper house said that the two parties have discussed, on this occasion, the means to strengthen bilateral cooperation on all levels, especially in the economic field which remains below the excellence of political relations between the two countries. Mayara stressed, for his part, the need to further promote parliamentary and economic cooperation with Guatemala, a friendly country known for its position in favor of the territorial integrity of the Kingdom, said the same source. For his part, the head of Guatemalan diplomacy highlighted the importance of developing bilateral relations in their parliamentary dimension, including through the reactivation of the friendship and cooperation group, an important prelude, in his view, for a deepening and strengthening of the Moroccan-Guatemalan friendship, concludes the statement.