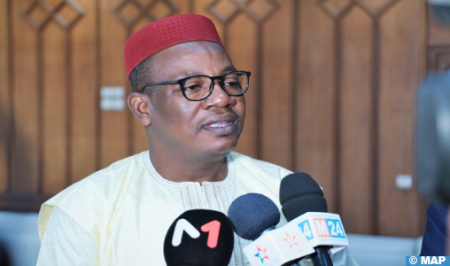 Niger’s position on the Moroccan Sahara issue is “clear and unambiguous”, said Friday in Rabat, Niger’s Minister of Communication, in charge of relations with institutions, Mahamadou Laoualy Dan Dano. In a statement to the press after his talks with Minister Delegate for Relations with Parliament, Government Spokesman Mustapha Baitas, Laoualy Dan Dano stressed that “Niger is an old friend of Morocco and will remain a friend of Morocco”. He also said that this meeting was an opportunity to review and exchange experiences in terms of relations with institutions, calling these talks, which also focused on strengthening diplomatic relations, “beneficial to both parties”. For his part, Baitas welcomed the “fruitful” talks, which focused on various areas of cooperation, especially those of common interest. This meeting, he added, was an opportunity for the Nigerian minister to reiterate the support of his country to the issue of the territorial integrity of Morocco and examine ways to strengthen cooperation in various areas, serving the interests of both countries.