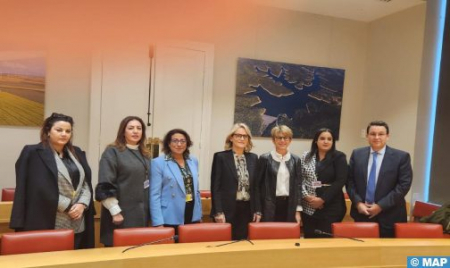 A delegation of the House of Representatives held talks on Thursday with officials of the French National Assembly and Senate. The parliamentary delegation met with the first vice-president of the French National Assembly (French Socialist Party), Valérie Rabault, the vice-president of the France-Morocco parliamentary friendship group of the French Senate, Céline Boulay-Espéronnier, and the president of the delegation for women’s rights and equal opportunities between men and women of the same House, Annick Billon. “Morocco is the most stable country in the region at the geopolitical level, given its deep-rooted political history and the strength of its institutions,” said Ms. Rabault, quoted in a statement of the House of Representatives, stressing the importance of bilateral relations and the Franco-Moroccan partnership, and the need to move forward in these relations. In this context, Rabault welcomed the reforms of the Kingdom, arguing that “Morocco, at the geopolitical level, is a stable country that enjoys a distinguished position internationally, which is essential. She also praised the participation of Moroccan women and youth in political life and institution building, the statement said. After highlighting the importance of the role played by the two legislative institutions of the two countries to achieve this goal, the first vice-president of the French National Assembly stressed “the need to continue the dynamism that marks the exchanges and dialogue between the two institutions.” The institutional twinning project between the House of Representatives and the French National Assembly and several other European national parliaments, supported by the European Union, reflects the willingness of the political authorities of the two institutions to strengthen and diversify the cooperation. For their part, the members of the delegation of the House of Representatives have highlighted the role that parliamentary diplomacy can play in the agreement between the two countries, stressing the need for mutual understanding on issues and interests vital to the parties, as well as the great importance of the freedom of movement of persons within a regulatory framework, notes the statement. They also reviewed the major reforms launched by the Kingdom, including economic and political empowerment of women, protection of their rights and achieving parity and equality, highlighting the great importance of social protection which is one of the structural reforms that characterize the reign of His Majesty King Mohammed VI. He added that the guarantee of social rights goes hand in hand with important political and institutional reforms based on twinning and structuring projects in the field of infrastructure and economic reforms in an inadequate global context, which the Kingdom is facing by arming itself with reforms and collective national determination to win the bet to consolidate progress and democracy. The members of the Moroccan parliamentary delegation also held talks with the president of the delegation for women’s rights and equal opportunities between men and women of the French Senate, and the vice-president of the Morocco-France friendship group of the Senate. These talks focused on the participation of women in political life, legislative and governmental institutions and on a number of issues of common interest. The delegation of the House of Representatives is on a working visit to the French National Assembly as part of the institutional twinning project between the House and six other legislative institutions (Czech Republic, Belgium, Italy, Greece, Hungary, and Portugal).