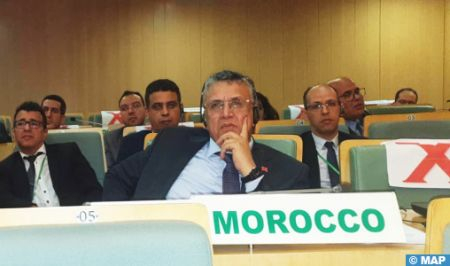 The 8th Ministerial Meeting of the African Union (AU) Technical Specialized Committee on Justice and Legal Affairs (STCJLA) decided on Sunday in Addis Ababa to postpone the consideration of nominations for the chairmanship of the Committee to the next session. There is a disagreement on the presidency of the CTS, which Morocco is also a candidate, and it was agreed to postpone the consideration of applications pending a consensus, said the Minister of Justice, Abdellatif Ouahbi at the end of this 8th session. Thus, the current composition of the STC Bureau is as follows Presidency: North Africa (vacant), 1st Vice President: Tanzania (East Africa), 2nd Vice President: DRC (Central Africa), 3rd Vice President: Zimbabwe (Southern Africa) and the Rapporteur: Gambia (West Africa). “This ministerial session considered several issues but there is a disagreement on an important issue in this case the issue of nationality and stateless persons and the representativeness of the African regions at the level of the Bureau, on this point Morocco has proposed three members from each region,” said the minister in a statement to the press. The 8th STC Ministerial Meeting considered the revised rules of procedure of the AU Ministerial Committee on African candidatures in the international system, the draft statutes of the African Training Centre for Statistics (PANSTAT), the draft statutes of the African Union Institute of Statistics (STATAFRIC) the statute of the African Humanitarian Agency, the draft legal frameworks for the African Centre for Disease Control and Prevention and the draft protocol to the African Charter on Human and Peoples’ Rights on specific aspects of the right to a nationality and the eradication of statelessness in Africa.