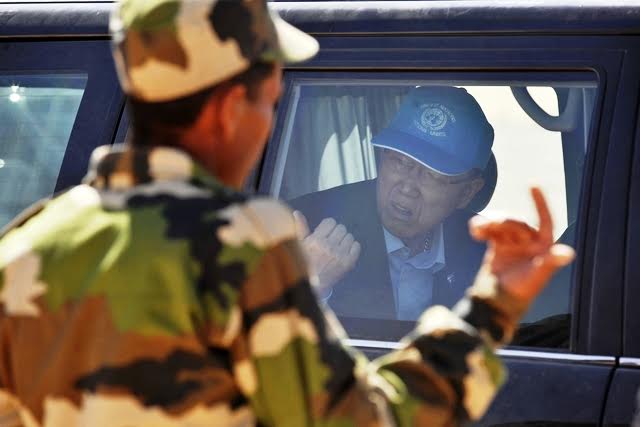 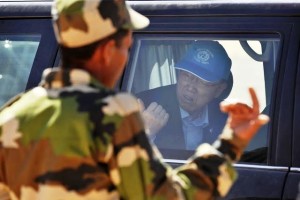 The convoy of the UN Secretary General Ban Ki-moon was greeted with stone throwing upon arrival Saturday in the Tindouf camps, second leg of his first North African tour, Western media reported.

Ban Ki-moon who was visiting the Tindouf camps (southern Algeria) Saturday has had the opportunity to see by himself that the situation on the ground was explosive, reported the Swiss e-journal http://www.24heures.ch/ which also posted a picture showing the UN Secretary General’s convoy being subjected to stones’ throwing despite the presence of the Polisario militia.

The UN Chief was going to a meeting with some youths, picked by the Polisario leadership, but was forced to leave quickly aboard a UN helicopter to Rabouni, after his motorcade was attacked.

Ban Ki-Moon, whose term at the head of the UN is nearing its end, came to the region, with a glimmer of hope to revive the settlement process of the 40 year- old territorial dispute, after his personal envoy Christopher Ross failed to get things done.

But the UN Secretary General’s tour was deliberately flouted by the Algerian propaganda machine and the Polisario that diverted it from its original purpose.

In the Tindouf camps, Ban Ki-Moon could only note the extreme poor living conditions imposed on the inhabitants by the Polisario and the Algerian regime.

The Algerian leaders boasted not long ago that they have more than $ 200 billion hard currency reserves, do not have external debts and can even lend money to the IMF, yet they have been unable to provide adequate treatment, accommodation and food to the some 90,000 Sahrawis who are compelled to live in complete destitution, in the Algerian desert.

So, Ban Ki-Moon’s tour did not yield any results, for the simple reason that Algerian leaders and their protégés, the Polisario separatists, are not interested by the Sahara issue settlement but by their whims to harm the Moroccan neighbor which disturbs their personal interests.