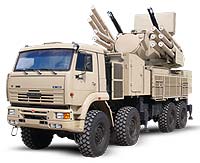 This year, Algeria has acquired sophisticated armaments, namely 38 antiaircraft systems Pantsir, purchased from Russia. The announcement has been made by the Russian press agency Interfax, which specifies that the amount of the contract is $ 500 million. Ultra-sophisticated systems acquired only by Syria and the United Arab Emirates up to now. But if it is conceivable that these two countries get equipped with such armaments because of the extreme tensions prevailing in the Middle-East, this is less understandable for Algeria case. What is this alarming threat pushing the Algerian military intelligence regime to undertake these crazy expenses?
Armaments added to a set of advanced gadgets that the Algerian military officials do not hesitate to order from the Russian plants at billions of dollars. Algeria has thus become one of the most armed countries in the world, even according to the SIPRI, Peace Research Institute, based in Stockholm.

The SIPRI has thus classified Algeria at the Top 10 of the biggest arms purchasers in the world. During the 2005-2009 period, Algeria has been classified ninth among the biggest arms importers in the world, and the 2nd at the Arab level after the United Arab Emirates. In Africa, Algeria has monopolized alone 43% of the Continent imports. Such huge acquisitions of the Algerian military machinery can be explained by currencies surplus generated by gas and oil sources. But do they meet a real need for defense or do they aim at pushing the region countries towards a non-useful and disastrous armament race?