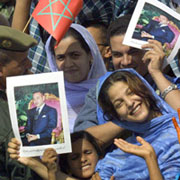 Guinea-Bissau’s decision to withdraw its recognition of the illusionist « Sahrawi Republic », so-called SARD, and to support the Moroccan autonomy plan for the Sahara, comes to reinforce Morocco’s approach welcomed by many countries in the world, and even by the American Congress and the European Union.
By joining a great number of African States, Guinea-Bissau redresses, thus, an enormous deception that has never been supported by the international community, nor by the main powers in the world.
El Haj Dahaba, State Minister, Special Counselor of the Bissau-Guinean President, has announced this decision, with clear words: “Morocco has submitted to the United Nations the autonomy proposal and the Guinea-Bissau, as member of the UN, will defend this Moroccan initiative to peacefully and definitively resolve this issue.

Thus, this new State in West Africa, situated between Senegal and Guinea, gets out of a ridiculous machinery recognizing a « State » which exists nowhere except in the propaganda of Algiers and its Polisario auxiliaries.
In fact, this diplomatic success is due to Morocco’s strong proximity with many African countries. But it is also the result of the audacious autonomy plan presented by Morocco, and the reforms undertaken in the country on the political, economic and social level.