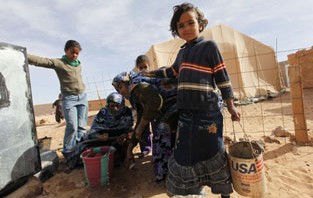 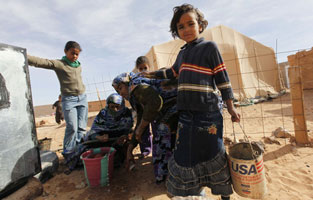 The current wave of people returning back to Morocco in groups, after having been sequestrated in Tindouf camps, has increased more than ever. Within few days, their number has surpassed a hundred.
In small groups of 10 or 15 persons, sometimes more, young persons, women with children, sometimes militaries deceive the vigilance of the Polisario and Algerian militaries guards, to return to Morocco. Some arrive to the South of Morocco by their own means, via Mauritania. Others directly cross the wall, even if they expose themselves to major dangers. Finally, those possessing a Spanish residence permit, easily return via Spain, explains one of these rallies.
The testimony of Mahjoub Mustapha Baba (31 years old), a Polisario military who has returned back to Morocco on Sunday 11 April, reveals these rallies’ determination, “The situation in Tindouf camps is tragic and life conditions prevailing there are awful”, he has affirmed at his arrival.
It is natural, as these camps based in the Algerian desert escape from any international control. Thousands of persons with neither defense nor resources are imprisoned there at the mercy of the Polisario discretion.

Tens of national and international NGOs still call the international community and the UNO to require investigations upon the human rights violations, committed with impunity in Tindouf, in the Algerian territory. But in vain up to now.
The absence of the international control regarding what happens within Tindouf camps results in the abandoning of thousands of persons in the desert, victims of cynical political calculations.
It is within this context that the escape of the current sequestered persons continues, in small groups or individually for those who can do it.