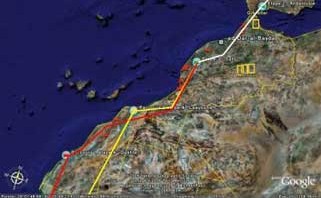 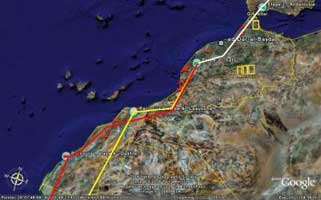 The peace caravan, organized in solidarity with the Moroccan project for the Sahara autonomy, and gathering 350 persons : those operating in associations, Moroccans living in Europe and journalists, namely from Belgium, Luxembourg, France, Switzerland, Spain, Tunisia and Algeria, has arrived to Laayoune, on June 17th, after having left Brussels and gone through many European capitals and Moroccan cities.
The Peace Caravan has started its journey from Brussels, more exactly from the European Council headquarters, an opportunity to hand over to European executives letters supporting the Sahara autonomy initiative. Letters denouncing also the living conditions of Sahrawis sequestrated in Tindouf camps, in the Algerian territory. The Peace Caravan has, thus, gone through many European capitals and big cities among which Strasbourg, capital of the European Parliament, Paris, Lyon, Barcelona and Madrid in order to make the European public opinion aware about the importance and credibility of the Sahara autonomy project and about the historical, political and cultural legitimacy of the Moroccan provinces in the South.

The parade for peace to the Sahara, with the symbolic figure of 350 participants (men and women), in reference to the 350 000 participants in the green march, with their cars and buses, has reached Rabat, on June 15th, before continuing its tour  towards Laayoune, then Smara and Dakhla. It should reach in the coming days, Lagouira, last phase of this journey dedicated to peace and autonomy in the Sahara.
The Peace Caravan comes within the active solidarity with the Moroccan people for the completion of their territory integrity and the implementation of the Sahara autonomy project, initiated by Morocco and largely approved by the international community. Because, once again, underlines Mrs Zahra Hidara, President of the Sahrawi Association for  Solidarity with the Sahara Autonomy Project and event organizer “Moroccans living in Europe are mobilized, as usual, to reiterate the Sahara Moroccanity and request the release of our Sahrawi brothers sequestrated in the camps of shame in Tindouf, in the Algerian territory”.
Besides Moroccans from Europe, the Peace Caravan includes among its members some Belgians, French, Italians, Luxembourgers, Spanish as well as Algerians, Tunisians, Iraqis and Palestinians.
During its European journey, the Peace Caravan has handed over letters to European political executives, among whom Jerzy Buzek, President of the European Parliament and Thorbjorn Jagland, Secretary General of the Europe Council calling the international community to act to put an end to the agony of the sequestrated Sahrawis, locked up in Tindouf camps and jails.
For Claudine Nassens, Vice President of Mons Press Club in Belgium, the initiative of the Peace Caravan aims at opening the Europeans’ eyes on the reliability of the Sahara autonomy project. It is certain, as she maintained, that the fact of « allowing us to visit the Southern regions proves that Morocco has nothing to hide and that it has all the legitimate right, all the more that the autonomy project proposed for these regions has obtained a large adhesion from the international community”.