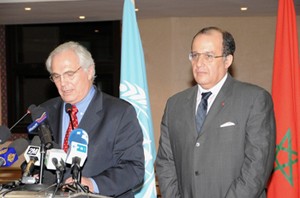 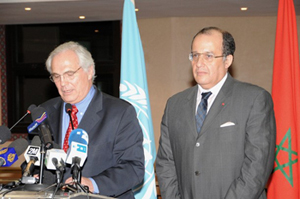 Christopher Ross, the personal representative of the UN General Secretary for the Western Sahara, has arrived on Friday 22nd October, to Morocco, within the scope of his tour in the region to clear out the way for a resumption of negotiations which would have an impact on the future of the Sahara. After his being in Algeria, then in Tindouf camps under the authority of the Polisario in the South-west of Algeria, then in Mauritania, Christopher Ross should review with the Moroccan senior executives the resumption of negotiations taking place since 2007.To this date, and after a situation of deadlock which has lasted for many years, negotiations have started again following the proposal made by Morocco to grant a large autonomy to the Western Sahara. A proposal welcomed by the Security Council which has qualified it of being credible for serious negotiations.

The autonomy plan praised by the international community, has been systematically blocked by the Polisario and Algeria which supports and hosts on its territory the Front pleading independence. Facing the sinking of negociations, Christopher Ross’s predecessor, Peter Van Walsum has ended by throwing in the towel, but after daring to recognise in front of the Security Council in 2008, that « the independence of the Western Sahara (strongly recommended by Polisario and Algeria) was not a realistic option ». Today again, Polisario and Algiers continue claiming a self-determination referendum, believed to be unenforceable and unrealistic, not only by Morocco but also by the major part of the international community. This week again, the American Deputy Secretary of State for the Middle-East, Jeffrey D. Feltman, has delcared : « Morocco has made a step with a serious and credible proposal » to reach a political and sustainable solution. An important position confirmed by many European countries, and especially by the Sahrawis themselves who are refugees in Tindouf camps. The case of the Polisario police chief, Mustapha Salma Ould Sidi Mouloud, arrested on the 21st September and imprisoned in a place kept secret till today, by the Polisario, for having simply supported publicly the autonomy plan for the Western Sahara, is an authentic illustration of all this.