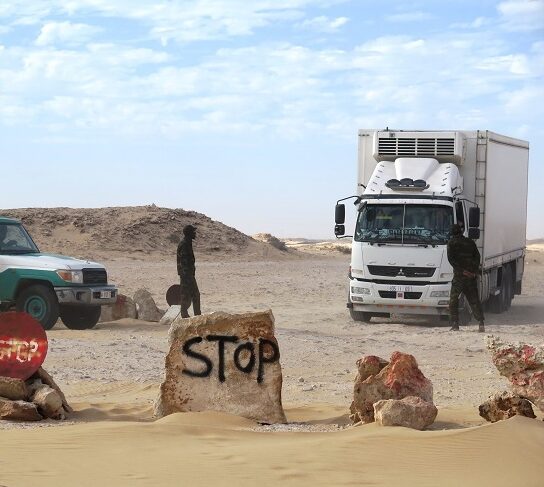 The Guerguerat border post, the only land crossing point for people and vehicles between Morocco and Mauritania, has been blocked once again, since Monday morning, by a dozen of Polisario militiamen, from the zones located to the east of Moroccan security wall.

The traffic namely of trucks transporting goods has been paralyzed by these mercenaries who take advantage of the porous borders of Mauritania to infiltrate into the Guerguerat buffer zone which is under the exclusive control of the UN peace mission in the Sahara “MINURSO”.

Polisario leaders resort usually to such a behavior with the publication of a new report on the Sahara by UN Secretary General Antonio Guterres, by making provocative acts against Morocco and the United Nations.

Following this new provocative act made by Sahrawi mercenaries, the MINURSO sent in three emissaries in a bid to convince the Polisario militiamen to end their reckless behavior. But unable to justify their act, the mercenaries called on the UN to stop the so-called “plundering of Western Sahara resources by Morocco”.

The Polisario leadership has already slammed the UN and UN chief Antonio Guterres for the delay in appointing a new personal envoy for the Sahara in replacement of former German envoy, Horst Köhler who had resigned for health reasons in May 2019.

The Polisario torturers are irked by the launch by Morocco of the construction of a solar power plant in Dakhla. But as last year, following the adoption of UN resolutions by Security Council, Polisario militiamen will ultimately backtrack and leave Guerguerat crossing point as they have done in the past.