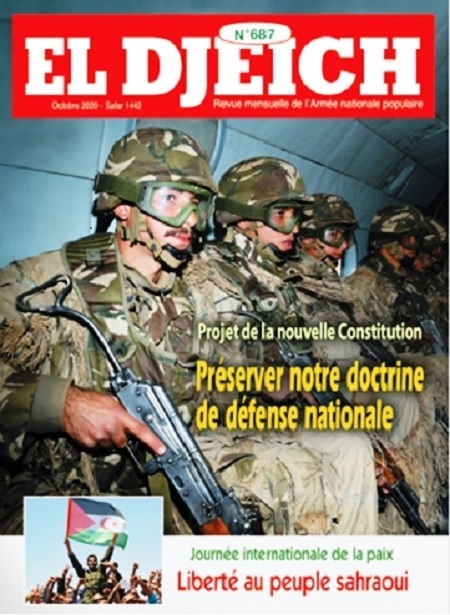 The Algerian generals, who are ruling the country behind the scenes since its independence, seemingly want to take over the job of their diplomats after the series of setbacks suffered in their showdown with Morocco over its Sahara since President Abdelmajid Tebboun came to power in a disputed election.

The resounding defeats suffered by the Algerian diplomacy and the Polisario at the United Nations and the European Union as well as in Africa and Latin America have irked and dealt a hard blow to the leaders of Algiers and Rabouni, prompting them to lash out at the UN and the Security Council for discarding the self-determination referendum obsolete option and for the delay in appointing a new UN mediator in replacement of Horst Köhler.

The Algerian army (ANP) is now using its monthly magazine “El Djeich” for launching a hostile campaign against Morocco and especially against its Sahara, to which the army magazine devoted two exhaustive stories in its September and October editions.

These stories confirm the involvement of Algeria, both military and civilians, in the territorial conflict opposing Morocco to the mercenaries of the Polisario.

After last September’s provocative story entitled: “The Western Sahara is not a Moroccan land”, the author of this new 11-page feature entitled “Freedom to the Sahrawi people” takes aim vehemently at Morocco, defending baseless separatist theses and their Polisario Front puppet.

In this story, the mouthpiece of the Algerian army, which is known for its deeply rooted corruption, not only tackled the issues which anger neighboring Morocco but cites an interview with the so-called “ambassador” of the Polisario in Algiers, Abdelkader Omar Taleb, giving him the opportunity to attack Morocco and Moroccans.

The author of the story focused on the alleged “human rights violations in the Sahara” and the latest events at the Southern Moroccan Guerguerat crossing point on the border with Mauritania. It criticized the latest report of the UN Secretary General who warned the Polisario and its Algerian sponsor against violations of the ceasefire and deplored the deteriorating human rights situation in the Tindouf camps.