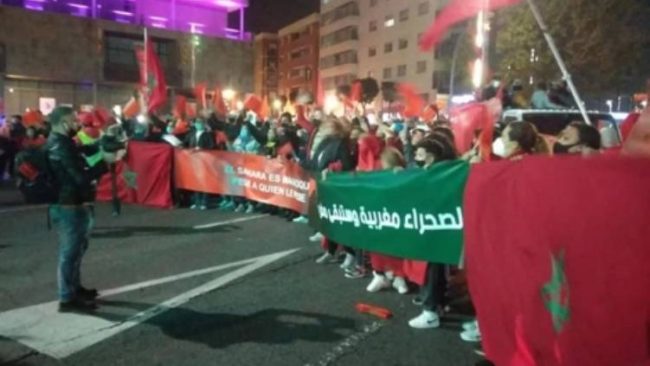 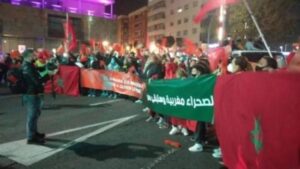 Hundreds of Moroccans living in Tarragona (Catalonia) took part, Tuesday evening, in a large demonstration to express their full support to the legitimate Moroccan intervention to end the obstruction of the Guerguarat crossing point and condemn the criminal attack of the consulate of Morocco in Valencia by polisario elements.

Human rights activists, politicians, and representatives of more than 20 Moroccan associations active in the region, in addition to many members of the Moroccan community, gathered at Imperial Tarraco Square to express their full and unconditional support to Morocco’s action to end the blockade of the Guerguarat crossing point, restore the normal flow of trade, and the movement of goods and people.

They also hailed this legitimate, professional and peaceful intervention.

The protesters, who marched from La Rambla Square to Imperial Tarraco, were holding banners slamming the criminal attack on Morocco’s Consulate General in Valencia by polisario thugs, in violation of international agreements on the immunity and inviolability of diplomatic representations.

The demonstrators were waving Moroccan flags and chanting the national anthem. They called for the trial of those who committed this criminal act against the consular building.

Representatives of some local Spanish political parties and many Spanish nationals took part in the huge protest which was marked by the screening of a video showing Polisario’s criminal acts, including the exploitation of children for military purposes.

The exploitation was decried by many participants in the Tarragona demonstration. They expressed their strong condemnation of such acts that violate the most basic rights of children.