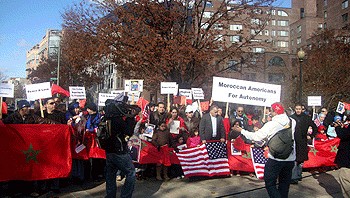 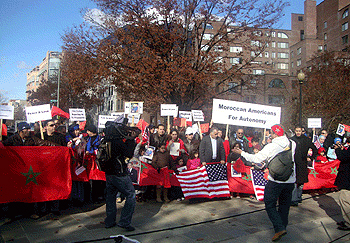 Everywhere in Morocco and elsewhere in the world, thousands of Moroccans have organized these last two days, impressive peaceful demonstrations against the campaigns launched by the Spanish media hostile to Morocco. Yesterday, Sunday, it was in Casablanca, where some two to three million Moroccans have come from all the regions of the Kingdom to denounce the campaigns of propaganda and disinformation led by the media and the Spanish political bodies, namely the Popular Party, following the bloody events of the 8th November in Laayoune. On Saturday 27th November, Moroccans settled in the U.S. have been through a “peaceful march” in Washington, starting from the Spanish embassy. Coming from all the States, the Moroccan citizens were hoisting, along their march, placards castigating “facts distortion by the Spanish media regardless of professional ethics”.
“Yes to an honest journalism »,  « No to the propaganda », « stop to distortions » and « let’s denounce lies together », are, among others, the slogans chanted on this occasion by the demonstrators. The latter have “condemned the tendentious spirit of certain Spanish media editorial line, which, in their blind hostility to Morocco and to its sacred causes, have trampled underfoot the professionalism and proprieties rules”.

They have, furthermore, drawn the attention of the American society and the international community about the risks presented by the relationship taking place between the Polisario and the terrorist group of Al-Qaida in the Islamic Maghreb. They have called, for this purpose, the US administration and Congress to make them aware of the risks and dangers which threaten the North of Africa and which are represented by these links with the nebulous terrorist group.
The same day, Brussels, capital of the European Union, has witnessed hundreds of Moroccan demonstrators as well as from other nationalities, coming from Belgium, France, Germany and Netherlands. They take in turns during their march, patriotic songs and slogans in favour of the Sahara moroccanity and support to the autonomy plan for the Western Sahara. During this gathering, organized following the call launched by the group of Belgo-Moroccan associations and the civil society in Europe, the demonstrators have highly and strongly denounced the campaign of denigration and use of violence in Laayoune by the Polisario and Algeria and by certain Spanish milieu who have adhered to their thesis.
The demonstrators have also condemned the drifts of certain media, namely the Spanish media and its defamatory campaign against Morocco.