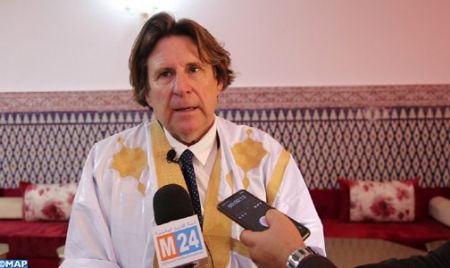 The Spanish political pundit Pedro Ignacio Altamirano called, Saturday in Dakhla, for “urgently opening a humanitarian corridor” in order to allow the populations in captivity in the camps of Tindouf (South of the Algeria) to return to their motherland, Morocco, to live in peace and security.

“We will ask all international organizations to urgently open a humanitarian passage to allow all the population held against its will in the Tindouf camps, on the Algerian territory, to return home and live in peace and prosperity” like their brothers in the southern provinces of the Kingdom, Altamirano told MAP, on the sidelines of his meetings with elected officials from the region of Dakhla-Oued Eddahab.

Altamirano, who is also spokesperson for the international peace group for the reunification of the Sahrawis, affirmed that the group underlines the need for the involvement of European and international civil society in the resolution of the conflict over the Sahara and the recognition of the full and entire sovereignty of Morocco over this territory.

It is time to definitively resolve the conflict over the Moroccan Sahara, “created from scratch to serve the interests of Algeria”, he added, saying that he was confident that this solution within the framework of the Moroccan sovereignty “will see the light of day soon”.

He also pointed out that the international peace group for the reunification of the Sahrawis, which includes personalities from Andalusia and different countries, was created in Malaga, Spain to achieve this objective.

Pedro Ignacio Altamirano, known for his positions defending the Moroccanness of the Sahara, has received death threats via social networks, by two deranged members of the “polisario”.

Terrified by the aggressive and criminal nature of these acts, Altamirano lodged a complaint through his lawyer with the investigating judge of the Malaga court.