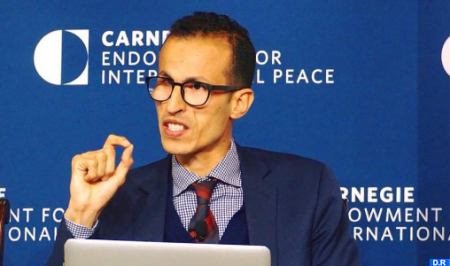 Paris – The polisario, a mercenary group created by Algeria in 1973 amidst the Cold War to serve its quest for regional hegemony, is today one of the main threats to the security of the Sahel-Saharan strip and the Mediterranean basin, as confirmed by numerous reports from intelligence agencies and research centers, said Mohammed Ahmed Gain, university professor and president of the African Institute for Peacebuilding and Conflict Transformation.
“Today, the Spanish security authorities announced the arrest of a member of the polisario who was preparing to carry out terrorist attacks targeting the interests of the Kingdom in Spain,” he pointed out in an interview with MAP ahead of a virtual conference on the theme “Threat of the polisario for the Euro-Mediterranean region: an undeniable responsibility of Algeria,” co-organized by the Institute for Prospective and Security in Europe (IPSE) and the Mandela Institute. According to Gain, the threat of the separatist movement comes mainly from its proven links with terrorist groups in the region, as well as cross-border crime networks operating in the Sahel, including those active in arms and drug trafficking. “It is also known that this separatist group has close ties with Iran and Hezbollah, which are a threat of destabilization that goes beyond the Sahel-Saharan strip,” he added. On how Europeans should react to this threat, the Moroccan academic stressed that European countries, which are fully committed to fighting terrorism in the region, are fully aware of the threat posed by the polisario, including its proven links with transnational terrorism. All European countries are committed to the security and stability of the Sahel, and rightly encourage regional and sub-regional cooperation against conventional and emerging security threats in the region, he added. Today, the Sahara, under Moroccan sovereignty, is a hub of stability in the Sahel region and this is precisely why European countries must double their efforts to end the threat of this separatist movement, Gain said. “It is necessary that these countries come out of their silence and engage in concrete actions in this perspective, by acting so that polisario is subject to a sanctions regime mandated by the Security Council, like ISIS and other terrorist groups,” he concluded.