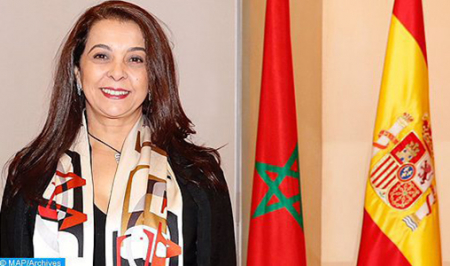 Madrid – Morocco’s Ambassador to Spain Karima Benyaich held a meeting, on Friday in Madrid, with the President of the Central American Parliament (Parlacen) Fanny Carolina Salinas Fernandez, on means to develop cooperation ties between Morocco and the Central American countries.
During this meeting, held in the presence in particular of the vice-president of Parlacen Amado Cerrud Acevedo and several permanent members of this regional institution, Benyaich reviewed the structural reforms undertaken under the insightful leadership of HM King Mohammed VI, stressing that the visionary policy of the Sovereign has made the Kingdom a model to be followed at the regional and continental levels. The Moroccan diplomat highlighted Morocco’s unwavering commitment to develop its relations with the Central American countries, lauding the excellent relations between the two parties, the level of cooperation in various fields and the cultural similarities uniting Morocco and the Parlacen countries. The ambassador recalled that Morocco has put in place a proactive and anticipatory strategy against Covid-19 by adopting restrictive measures that have enabled to slow the spread of the virus while helping the most affected sectors by the economic effects of the pandemic. In addition, Morocco is leading an exemplary vaccination campaign against Covid-19, added Benyaich, specifying that so far 4,329,244 Moroccans have been vaccinated and 3,767,210 have received the second dose. For her part, Salinas Fernandez thanked HM the King for the aid granted by Morocco to several Central American countries devastated by hurricanes, noting that the Sovereign has always shown active solidarity and support for all those in need. The Parlacen, a regional grouping in which Morocco has the status of observer member, is determined to move forward in its multifaceted cooperation with Morocco, a pioneer country in several fields, she noted, welcoming the support provided by Morocco for the promotion of development in the countries of the region. Regarding the Sahara issue, the president of Parlacen defended Morocco’s sovereignty over its southern provinces, calling for a “just and lasting” solution to this artificial dispute in the respect of Morocco’s sovereignty and territorial integrity.