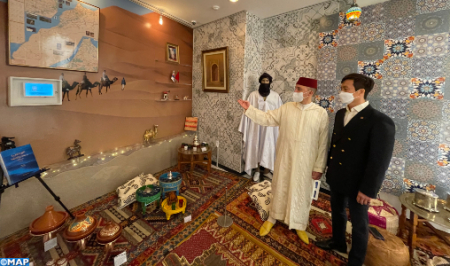 Morocco’s cultural heritage is on display in Seoul, South Korea, part of an exhibition themed “Treasures of the Mediterranean and North Africa, Morocco.” The official ceremony of this exhibition, organized with the input of Morocco’s Embassy in Seoul, took place Friday in the presence of a host of personalities including by representatives of South Korea’s Ministry of Foreign Affairs, the Seoul City Hall, and the Korea-Africa Foundation, in addition to heads of foreign missions and other figures. Speaking on this occasion, Morocco’s ambassador to South Korea Chafik Rachadi highlighted the kingdom’s cultural plurality as well as its linguistic and artistic diversity, which have always been the cornerstone of the country’s singularity. For his part, the director of the Museum of Multiculturalism Kim Yun-Tae stated that this exhibition allowed guests to make a journey through dunes and oases to discover the splendor of the Sahara. The exhibition, which runs until April 24, 2021, highlights the potential and diversity of Morocco’s region, offering Korean and foreign visitors a unique opportunity to become familiar with the various components of Morocco’s secular cultural heritage. Part of the exhibition, a typical Moroccan house was set up at the premises of the Museum tracing the diversity of cultural tributaries and identity. An exhibition pavilion dedicated to the richness of Morocco’s Southern provinces offers visitors a glimpse of the values of hospitality and generosity characterizing the Hassani culture. The other highlight of this event is the projection of several video clips displaying the richness of the Moroccan cultural heritage from Tangier to Lagouira, the tourist potential of the city of Dakhla as well as the major structuring projects conducted under the rule of His Majesty King Mohammed VI.