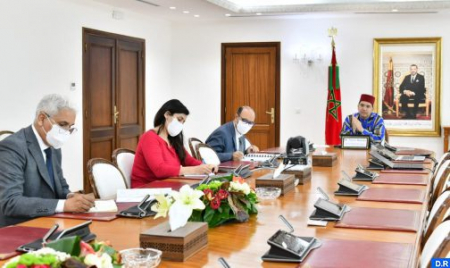 Minister of Foreign Affairs, African Cooperation and Moroccans Abroad, Nasser Bourita, on Thursday held talks through videoconference with his Egyptian counterpart, Sameh Chokri. The two ministers discussed, on this occasion, the means to strengthen relations between the two countries given the strong ties of brotherhood and fruitful cooperation that unite them, said a statement from the ministry of Foreign Affairs. They also insisted on the importance of raising bilateral relations to the level of the aspirations of the two heads of state, HM King Mohammed VI and his brother President Abdelfattah Sissi, who co-chair the High Bilateral Joint Commission, the statement added. The two parties underlined, in this regard, that the economic and investment dimensions constitute an important lever for the promotion of bilateral relations. They also voiced the capacity of Morocco and Egypt to establish complementary cooperation in various areas, given the strategic location, economic potential and human skills of the two countries, in addition to a rich and diversified legal framework exceeding 100 legal texts. Bourita and Chokri also expressed the hope that the health situation linked to the spread of Covid-19 will improve globally, to schedule the 4th edition of the Coordination and Political Consultation Mechanism as soon as possible in Cairo.  This mechanism provides an institutional framework allowing the two countries to exchange views and strengthen coordination on various issues, at the Arab and the continental levels. Regarding the Moroccan Sahara, the Egyptian minister reiterated his country’s unwavering support for Morocco’s territorial integrity and for the Kingdom’s serious and credible efforts to achieve a solution to this issue. Regarding Arab and regional affairs, the two ministers agreed that the current Arab situation requires increased coordination and consultations between Morocco and Egypt, deeming necessary an Arab effort to strengthen solidarity and unity. They insisted on the countries’ attachment to the security of the Arab region and its stability, expressing their refusal of any foreign interference in Arab affairs. The two ministers underlined the need to respect the sovereignty of States and the unity of their territories. Talks also focused on the latest developments of the Palestinian issue. In this regard, the Egyptian minister praised the efforts of His Majesty King Mohammed VI, Chairman of the Al-Quds Committee, in the defense of the city of Al-Quds as a land of coexistence between monotheistic religions. The two ministers also spoke of the situation in Libya, stressing the importance of moving towards a comprehensive solution that can preserve the security and stability of Libya. At the continental level, the two parties emphasized the importance of coordination and cooperation at the level of the African Union, affirming their determination to strengthen consultation between the two countries on issues of common interest and to strengthen African integration to achieve the vision of “the Africa we want”. These talks were an opportunity for the Egyptian FM to inform his Moroccan counterpart of the latest developments in connection with the Annahda dam, in the light of recent negotiations between the parties concerned. In this regard, Bourita affirmed that the Kingdom of Morocco is closely following the talks and hopes to see the parties reach, as soon as possible, a solution that will satisfy them and preserve the rights of all, in order to collectively benefit from the Nile waters. He also stressed that dialogue, negotiations and compromises are the way forward to achieve this goal.