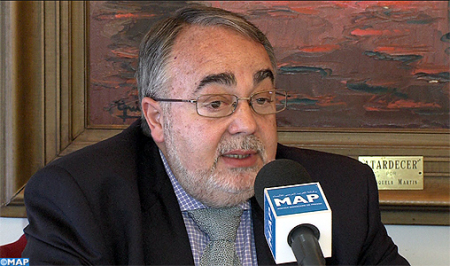 President of the Argentine Institute of Strategic Studies and specialist in African studies Adalberto Agozino highlighted Morocco’s natural trait of solidarity with African countries, which is attributed to “the multiple historical relations that the Kingdom has with Africa.” This role stems from the will of HM King Mohammed VI, who made over 50 visits across the continent along with large delegations of Moroccan officials, businessmen, and bankers, the expert explained in an interview with MAP. According to Agozino, the Sovereign plays a leading role in issues including migration and environment in Africa. Beyond the heavy political and economic ties, there are also cultural and religious ties between Morocco and African countries, placing the Kingdom as a “historical leadership” in the region, he added. Hence, African countries responded by an unquestionable solidarity action through the opening of African consulates in Laayoune and Dakhla, Agozino highlighted, describing it as highly rewarding support and true recognition to Morocco’s African policy. The multidimensional Moroccan commitment in Africa has not been to some countries’ liking, in this case, Algeria, which sees it as a threat to its hegemonic ambitions in Africa, he noted. The expert urged to verify the nature of the links that neighboring countries maintain with terrorist groups in the region, noting that many terrorist leaders in the Sahel region are of Algerian origin or maintain close ties with the polisario. By showing tolerance towards these terrorist groups, Algeria is undoubtedly sabotaging any attempt to cooperate in the fight against the activities of these groups in the Sahel region, Agozino warned. It is this collusion between organized crime networks and international terrorism that forms “this gray area where the corruption of some Algerian officials, the corruption of the polisario leadership, the interests of terrorist groups and illegal trade combine,” he concluded.