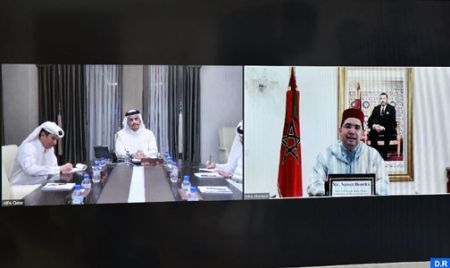 Minister of Foreign Affairs, African Cooperation and Moroccans Abroad Nasser Bourita met on Wednesday through videoconference with Deputy Prime Minister, Minister of Foreign Affairs of the State of Qatar, Sheikh Mohammed bin Abdulrahman Al Thani. During this meeting, the two ministers reviewed the process of bilateral relations and their tangible evolution in various fields thanks to the high solicitude of the leaders of the two brotherly countries, HM King Mohammed VI and His brother Sheikh Tamim Bin Hamad Al Thani, said the Ministry of Foreign Affairs, African Cooperation and Moroccans Abroad in a press release.  The two parties agreed to continue their efforts to prepare the eighth session of the High Joint Committee in Doha, chaired by the head of government, on the Moroccan side, and the President of the Council of Ministers, Minister of Interior, on the Qatari side, as soon as the Covid-19 sanitary situation allows it, according to the same source. On this occasion,  Bourita welcomed the position of the State of Qatar in favor of Morocco’s sovereignty over its Sahara and its territorial integrity, recalling the content of the November 16, 2020, phone call between HM King Mohammed VI and HH Sheikh Tamim Bin Hamad Al Thani.  During this call, HH Sheikh Tamim Bin Hamad Al Thani had expressed the support of the brotherly State of Qatar for the steps taken by the Kingdom to defend its security and territorial sovereignty. Reconciliation between the Gulf countries was also discussed, the release added. The Moroccan FM expressed, in this regard, the satisfaction of the Kingdom of Morocco with the results of the Al-Ula Summit and its subsequent steps, on the way to consolidate the unity between the Gulf countries. The two officials also exchanged views on several Arab and regional issues of common interest, affirming the commitment of both countries to dialogue, understanding and peaceful solutions to reach acceptable resolutions to the issues of the region, the release concluded.