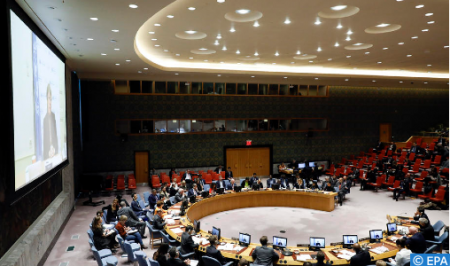 The United Nations Security Council held Wednesday its half-yearly session on the Moroccan Sahara. This meeting, held in closed consultations, took place in a serene atmosphere and ended without any declaration. The Security Council members were briefed by the Special Representative of the UN Secretary-General for the Sahara, Colin Stewart, on the situation on the ground, marked by ceasefire violations by the polisario and its impediments to the freedom of movement of the Minurso, thus hindering the ability of the UN mission to implement its ceasefire supervision mandate, according to diplomatic sources in New York. The Council was briefed by an official of the Department of Political Affairs of the UN Secretariat on the political process that is blocked by Algeria’s and polisario’s opposition to the appointment of a Personal Envoy. The members of the Security Council unanimously reiterated their support for the exclusively UN-led process aimed at reaching a political, realistic, pragmatic, lasting and compromise solution to the artificial dispute over the Moroccan Sahara, based on the Security Council resolutions since 2007. They also stressed the imperative and urgency of the appointment of a new Personal Envoy, a position for which Algeria and the polisario have rejected the proposals of the Secretary-General to appoint former Romanian Prime Minister Petre Roman, and subsequently, former Portuguese Foreign Minister Luis Amado. In contrast, Morocco promptly accepted the nomination proposals submitted by Antonio Guterres. The UNSC members also called for the resumption, as soon as possible, of the round-table process, to which Algeria is a main party recognized by the Security Council resolutions. They also stressed the need for a favorable and suitable climate to allow the resumption of this process where it stopped with the former UN envoy Horst Köhler. Members of the Security Council reiterated their support for the Moroccan autonomy initiative as a serious and credible basis for ending this regional dispute, as stated in the Security Council resolutions since 2007, which consider autonomy as a realistic, serious and credible solution. The Council members also welcomed Morocco’s cooperation with Minurso, including the vaccination of its members as part of the national Covid-19 vaccination campaign. In this regard, the success of the Moroccan vaccination campaign was highlighted. During this meeting, members of the Security Council denounced the blocking, last fall, of the Guerguerat crossing by the polisario armed militias, and highlighted the peaceful action of the Royal Armed Forces that allowed to restore once and for all the free movement. They also stressed the need for the full cooperation of the polisario with the Minurso, whose ceasefire supervision mandate is dangerously hindered as the mission’s patrols are blocked and the supply of military observers is impeded by the polisario. Some members of the Council expressed grave concern over the polisario’s withdrawal from the cease-fire, urging it to respect it and refrain from any act of provocation.