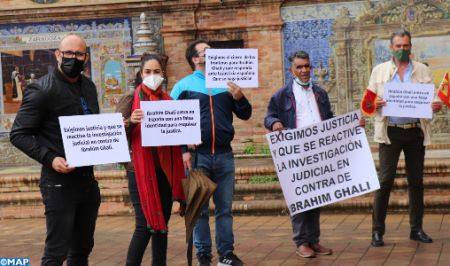 Representatives of Moroccan associations in the Andalusian region, on Monday, called on Spanish justice to arrest Brahim Ghali, leader of the separatist militias of the “polisario”, admitted in a Spanish hospital under a fake Algerian identity. During a sit-in front of the government’s delegation in Andalusia in strict compliance with sanitary regulations, the demonstrators, supported by Spaniards, have expressed their disapproval of Spain’s decision to host, in illegal conditions, the so-called Brahim Ghali, who is sought after and sued by the European justice for crimes against humanity and terror acts. Brandishing banners that reflect this discontent and urging the Spanish judiciary to reactivate the arrest warrant issued against the so-called Brahim Ghali in 2016, the demonstrators unanimously deplored the reprehensible attitude of the Spanish government that goes against the spirit of cooperation, partnership and neighborhood relations between the two countries. “The attitude of Spain is incomprehensible and does not serve the relations between the two countries. It is all the more reprehensible as it was presented by the Spanish Executive under a humanitarian pretext to help the respondent elude the justice,” regretted in a statement to MAP, Nadia Saffeddine, one of the participants in this sit-in. “We demand explanations from the Spanish government. This approach raises several questions at a time when we continue to praise the good relations between the two strategic partners, “she continued. “This criminal must answer for his actions before the courts and he must be banned from leaving Spanish territory until the Spanish justice has spoken its last word on his involvement in war crimes against Spanish and Moroccan citizens,” Saffeddine added. “By introducing a convicted criminal on its soil, Spain fails to respect human rights and tramples on the rights of victims who have suffered the abuses of this war criminal,” she added, questioning the reasons for his admission under the fake identity of an Algerian national. “As a Moroccan citizen residing in Spain, I deplore this attitude which harms good neighborliness and I express my disappointment with the attitude of the Spanish government and its maneuvers to sneak in this separatist discretely,” Saffeddine regretted. Taking part in this demonstration, Spanish entrepreneur Francisco Antonio Gonzalez has called on Spanish justice to react and fulfill its duty. Denouncing the presence on Spanish soil of a war criminal under a fake identity, he called on his country’s government to act responsibly so that justice can do its job and the so-called Brahim Ghali be brought before a court. “We want to draw attention to the fact that a criminal, sued by a Spanish jurisdiction, is hosted in a public hospital. We also want to highlight this irregularity so that the judiciary reacts,” he told MAP. “Through my participation in this sit-in (…) As a Spanish citizen and entrepreneur, I wish that the Spanish government ensures good relations with Morocco, our neighbor and friend,” Antonio Gonzalez stated. “The Sahara is a fundamental cause for Morocco and the Moroccan people, just as Morocco is fundamental for Spain. This is why it is important to ensure that the two partners are on the same wavelength,” he added. “The Sahara is Moroccan and it is time to support Morocco in this matter,” he pleaded. For his part, Ali El Akaoui, an associative stakeholder in Seville, called on the Spanish justice system to react as soon as possible because “its credibility that is at stake.” For El Arkaoui, “a war criminal must be prosecuted and arrested and not be protected by a government.”