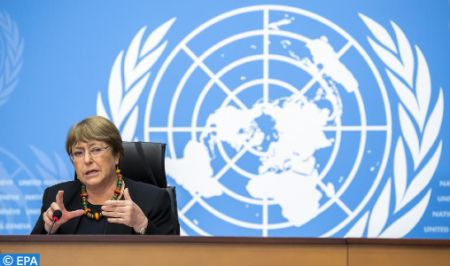 United Nations High Commissioner for Human Rights, Michelle Bachelet on Wednesday commended Morocco’s positive cooperation with the Office of the High Commissioner (OHCHR) and the UN human rights mechanisms. Speaking at a virtual meeting with the Group of Support for the Territorial Integrity of the Kingdom at the UN Human Rights Council (HRC), Bachelet hoped that this cooperation will be strengthened, while expressing gratitude to Morocco for its tangible contribution to the work and activities of the HRC. Concerning Morocco’s territorial integrity, Bachelet acknowledged the political nature of the regional dispute, which is subject to a political process under the aegis of the Security Council. She also reported that her office and the various mandate holders had received several allegations of human rights violations in the Tindouf camps, including repression of opponents to the separatist leaders, deprivation of rights of movement, recruitment of children into military militias, and prohibition of travel outside the camps. The goal of this meeting, attended by fifteen ambassadors, several deputy permanent representatives and experts in charge of human rights issues at the permanent missions in Geneva, was to reaffirm the firm and unwavering support of the member states of this Group for Morocco’s territorial integrity and the measures taken by the Kingdom in response to the provocations of the armed militias of the “polisario”, with the support of Algeria. The meeting was also an opportunity to express, once more, the Group’s rejection of the delaying tactics orchestrated by Algeria and the use of human rights for political propaganda purposes.