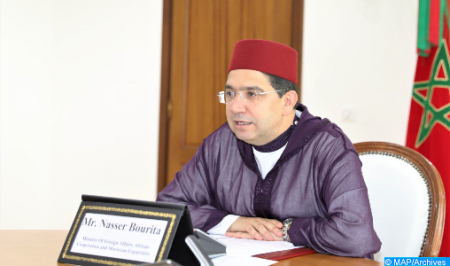 Morocco is still waiting for “a satisfactory and convincing answer” from the Spanish government regarding its decision to allow the so-called Brahim Ghali, prosecuted by the Spanish justice for crimes of genocide and terrorism, to enter its territory, stressed Minister of Foreign Affairs, African Cooperation and Moroccans abroad, Nasser Bourita. In an interview with the Spanish news agency “Efe”, published Saturday, Bourita noted that Morocco has not yet received from Madrid the answers to the legitimate questions he raised in the statement issued last Sunday. “Why did the Spanish authorities feel that Morocco should not be informed? Why did they prefer to coordinate with Morocco’s opponents? Is it normal that we learned about it through the press?” insisted the Moroccan FM, wondering if Spain “wanted to sacrifice its bilateral relationship” because of the case of the so-called Brahim Ghali. This case “is a test of the reliability of our relations and their sincerity, and whether they are just a slogan,” warned the minister, recalling that Morocco has always supported Spain in the face of separatism of Catalan independence. “When Spain was faced with separatism, Morocco was very clear, and at the highest level: rejecting any contact and interaction with them and inform our partners. When (the Catalans) asked us to receive them at the ministry, we demanded that a member of the Spanish embassy be present,” he recalled. “With partners, we do not maneuver behind their backs on a fundamental issue for Morocco,” said Bourita, adding that before moving forward in bilateral relations “we must first clarify things.” The case of Brahim Ghali reflects “the double face of the polisario: while its leaders are entitled to a private plane and a new identity, its population in Tindouf has neither mask nor hydroalcoholic gel, while it is ravaged by the Covid-19 in the most total indifference, he added. The so-called Brahim Ghali “is a rapist who has tolerated slavery, torture, war crimes, child soldiers and genocide, and Spain knows this before anyone else. Does it want to sacrifice her relationship with Morocco for this person?”, the minister questioned. On the complaints filed by the victims of the so-called Brahim Ghali, including the Sahrawi Association for the Defense of Human Rights (ASADEDH) and the Canary Association of Victims of Terrorism (ACAVITE), Bourita wondered “where is the Spanish justice in all this? Has no magistrate deemed it necessary to act on these complaints? Regarding the arguments that Spain was the occupying power of Southern Morocco, the Moroccan minister noted that this is “a pretext that no longer holds.” “We cannot remain prisoners of the Spanish past,” he insisted. Morocco and Spain maintain “a global partnership” touching on political, economic, commercial, human and security aspects, and this is where the migration issue comes in, Bourita said. We should not think that it is “a relationship à la carte: when it comes to plotting with Algeria and the Polisario, Morocco is off Spain’s radar, but when it comes to migration or terrorism, it becomes important again, the minister argued. In this sense, Bourita said that Morocco refuses to be “the policeman” of the European Union on migration issues. “Migration needs a comprehensive approach, not only a financial one: we must be partners in the vision, in the formulation of strategies, and not only in their implementation in exchange for a sum of money,” he added. Migration issues in Europe depend on political issues: “political polls, pressures and electoral deadlines lead Europeans to short-term thinking,” Bourita deplored, calling “not to demonize the migration phenomenon.”