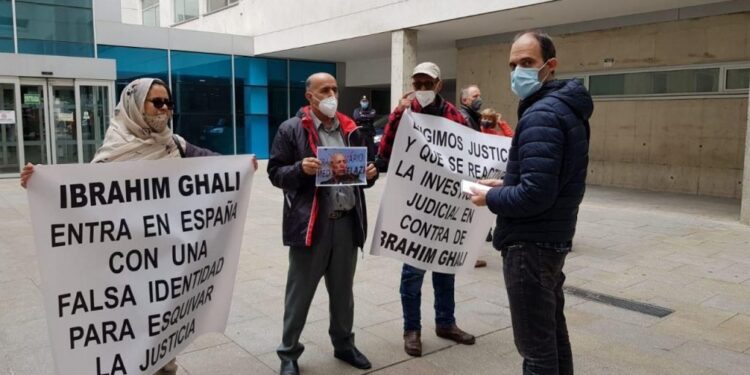 Several victims of the atrocities perpetrated by the leader of the polisario separatists, the so-called Brahim Ghali expressed on Saturday their anger at the Spanish government’s position to allow access to its territory of a man wanted by justice for crimes of genocide and terrorism. This criminal must answer for his actions before the courts for the serious charges against him, said the victims who gathered in front of the San Pedro hospital in Logroño, where this notorious criminal was admitted. Holding banners denouncing the illegal entry of the so-called Brahim Ghali in Spain under a fake identity and demanding the reactivation of the judicial proceedings against this mercenary, the demonstrators, who came from many neighboring cities, urged the Spanish government to execute the arrest warrant issued by Judge Jose de la Mata of the National Court, the highest Spanish criminal court.

In a statement read on this occasion, the victims of the criminal acts of the polisario have demanded the immediate arrest of the so-called Brahim Ghali and the extradition of his accomplices as soon as possible. On behalf of all victims of criminal acts committed by the separatists, they called on the Spanish government of Pedro Sanchez to assume its responsibility and do justice to the Spanish victims of the Polisario instead of hosting a criminal in violation of national and international law.

The local press has widely reported this demonstration of protest, including the newspaper “La Rioja” and the general information portal “tribunalibre.info”. The hosting by Spain of the leader of the separatists under a fake identity and with falsified papers in coordination with the Algerian state has generated strong reactions of reprobation and condemnation around the world. The Iberian country is accused of helping a war criminal to escape justice and of supporting his actions.